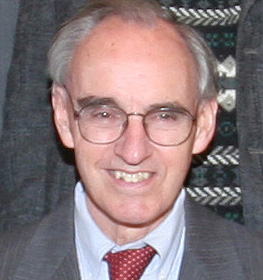 A cynic might say that Steve Shepard, my old boss at BUSINESS WEEK, has to believe there is a future for the scribbler’s art. He runs the graduate school of journalism at City University of New York after all.

But it’s more than just where he sits that determines where he stands. Steve is a star in the field. The inveterate New Yorker — betrayed by both his accent and his misguided love of the Yankees — has collected just about every award available to magazine journalists. He knows what readers need.

The best proof of that is how he resuscitated the BW franchise. He turned the magazine into a growth vehicle, in the ’80s, after long-time parent McGraw-Hill had begun treating it as a cash cow, an aging brand that had plateaued in the market. In fact, Shepard later saw the book grow so fat that we had to turn away ads because the page count was busting the staples. That happy time was less than a decade ago. Sadly, of course, it is far thinner today.

Steve offered his views on the future of business journalism in this intriguing interview. He’s upbeat about BW’s future under Bloomberg. He’s convinced, too, that there is a future for business news reporting, though it will have to adapt to new formats. Take a gander:

The Future of Business Journalism from CUNY Grad School of Journalism on Vimeo.

Of course, the issue is how business journalism will support itself. Bloomberg is an intriguing model, since the biggest consumers of its news service pay a lot for it, something on the order of $20,000 a year for access to the famed Bloomberg terminal. Problem is, that’s a limited market, chiefly serious traders on Wall Street.

Bloomberg’s purchase of BW last fall was designed, in part, to expose the outfit’s news and information to a broader audience. BW brought it some 4.5 million readers in print and even more users of the BW Web site. The pub, with its 80-year-old brand name, is quite a crowd-broadener.

But plenty of questions loom. Steve argues, for instance, that there’s room for one long-form business mag. So, does that mean that Forbes and Fortune disappear? And will Bloomberg subsidize BW if it can’t grow fat again with ads? Is it sufficient that it be a marketing vehicle for the name and terminals or other outlets Bloomberg may develop for its products? Can the product succeed as a loss-leader?

Some folks argue that the general news service at Bloomberg is a big loss-leader already. Former colleagues of mine, such as Steve Baker, contend that traders pay for relatively narrow slices of information relevant to their work and ignore the bulk of the news on the machine. Of course, since Bloomberg is private, outsiders can’t know for sure how the news service fares financially.

For fans of long-form business journalism, the question is whether the format can survive only if it has a Big Daddy like Bloomberg. Will analytic and insightful work, the kind that made BW great, pay its own way? Will consumers pay anywhere near what it costs, now that so many advertisers have found other more cost-effective vehicles? Is the current slump more a reflection of economic stress or something deeper? Will business pubs prove to be niche operations serving elite audiences, much in the way that Harper’s or The Atlantic do?

At the end of the day, it seems clear that people who need financial and economic news will be served. They may be served over cell phones, iPads, the Net or someday by brain implants — who knows? — but their demand for information will be met. The challenge for business journalists is to figure out how to make sure these folks pay the freight so they can keep churning out top-quality work. And, for budding journalists, the challenge is to make sure that they can serve up the goods in whatever form the market requires.