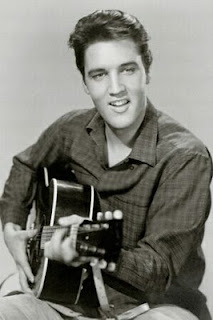 Elvis Presley’s road toward iconhood began at age 18 and ended at 42. Hard to believe that in just 24 years – the blink of an eye, or curl of a lip – this poor southern boy with a guitar changed cultural history and then vanished. It’s also a troubling reminder of how little time we all have to make our marks, however big or small.

This pop-culture reminder of mortality struck home for me as several of us visited Graceland last week after running in the Memphis marathon and half-marathon. For devotees, of course, the place is a shrine and the spot where the King is buried along with his parents and grandmother. Visitors drop little stuffed animals on the graves and scrawl messages on the low stone wall lining the front of the property.

Even though I’m less a Presley fan and more a Dylan, Lennon, Springsteen sort of guy, the visit offered some unsettling truths.

First, some background: Graceland, a doctor’s house not far from downtown Memphis that Presley bought at age 22, is surprisingly modest. Aside from the white-fenced grounds out back where he had horses and a big carport for his car collection, the main house is not much larger than an upper-middle-class home in just about any comfortable suburb. When we were house-hunting, Donna and I checked out houses in Lincoln, Neb., that were more impressive. 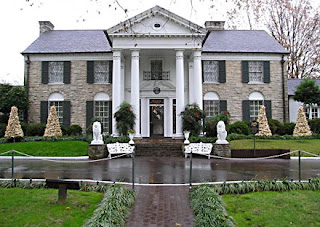 But for Presley and his wife and lone daughter, as well as his parents, it was home. Even as he roamed around North America making his name – in Hollywood, Vegas, etc. – he would return to the stone Colonial to hang out with his family and boyhood chums. He even recorded in the Jungle Room, a place done up like a lodge you’d see on safari. Graceland was, one would guess, a palace to a kid who began life in a shotgun shack. He even carpeted ceilings in some rooms, a foretaste of the kitsch that sadly dominates Elvis’s legacy.

For all the crassness around his memory, he was a Colossus in pop culture. Today, a couple outbuildings near the house are packed with gold, silver and platinum record plaques commemorating an astonishing list of hits. A room in one two-story building is lined floor-to-ceiling with them. Elvis was remarkably prolific and hardworking, something belied by his easygoing stage persona or the goofy movie characters he played. He starred in 31 movies – hard to believe, especially since all are forgettable – and he was, we heard, quite insecure about returning to live performances after nearly a decade of Tinseltown.

One of the taped interviews that visitors listen to as they roam around Graceland is revealing, even profound. When he decided to make a record, Presley says, he would pick songs that he believed people would want to hear – not what he wanted to sing, necessarily, but rather what he figured the public would like. 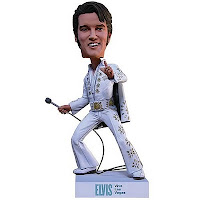 That may seem obvious for someone who wants to sell records or anything really. Anyone with customers knows you need to please them to sell more stuff, right? On the other hand, for artists or other creative people, serving an audience is usually the furthest thing from their minds. They want to give voice to their inner thoughts, to express themselves, perhaps to purge their demons. They want to share their brilliance or their pain. But they aren’t about meeting customer tastes.

Presley was different. His genius was in entertaining. Especially in his grotesque Vegas phase, he was trying to please and pack the house. He didn’t write his material. But he did sing it, of course, with power and panache. He was fun to listen to, and in business terms he knew his market and served it well.

But he also, in his early days, broke the mold. He created the market. He brought a unique style, a personality and an approach that departed from what had gone before. He made Sinatra and such look impossibly passé. He was one of a kind who hit at just the right time for a postwar generation looking to define itself as different and new. With some overstatement, Abbie Hoffman argued that Elvis marked the beginning of a revolution in America. Certainly, his loose hips, sultry voice and swagger – tempered by a nice-guy demeanor – worked for the 1950s set and for many beyond that. He paved the way for my later musical heroes.

That sort of originality is what it takes for anyone to make a deep mark – whether in novels, music, nonfiction, journalism or teaching. Few get to stride the world stage like Elvis, though every kid who plays at being a rock star is knowingly or unknowingly imitating the King. Few have millions paying attention to their writings or their artwork. But even those who reach even modest levels of fame – superstars or just people known for being good researchers, lawyers, doctors, etc. – must bring something fresh to the party. That was lesson number one for me from Graceland.

More troubling for me at age 56 is lesson number two: the preciousness of time. They’re not making more of it, and none of us has enough. For my money, Elvis made his rep for a few years in the ‘50s and fed off that for the rest of his surprisingly short career. A blazing comet when he was young, he was long gone culturally by the time he actually died, at Graceland, in 1977. Similarly, the Beatles did their pathbreaking work for really just a few years in the 1960s. Going to a Dylan concert this past summer was a bit like visiting a museum, and an odd one at that. 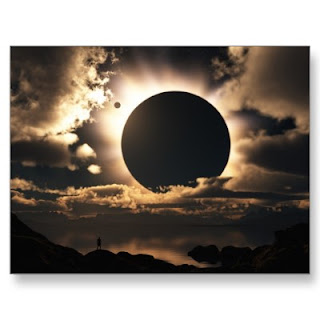 The time in the sun is distressingly short for us all, and if you don’t figure out early on how you’ll shine, you may never do so. Remember Tom Lehrer’s wonderful and sad line: “It is a sobering thought, for example, that when Mozart was my age he had been dead for two years.”

There will never be another Elvis. All the kitschy crap – bobblehead dolls and Mr. Potato Head Elvises – that is peddled pathetically across the street from his former home will become a memory. Maybe it’ll take a decade, maybe longer, but a time will come when no one goes to Graceland anymore. The marketers still raking in a bundle on him will find other things to sell.

For now, though, Mr. Presley remains a handy case study in freshness, good timing and the chance we all have to make our mark while we may. This year would have marked Elvis’ 75th birthday. It’s grand that we have the 20-something version to remember.