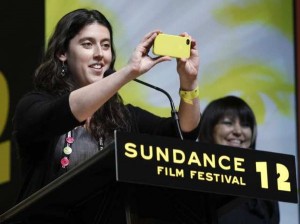 Alison’s film has garnered a ton of praise. It won a special jury prize at the Sundance Film Festival, was an official selection of the Berlin International Film Festival and was an opening night film at the Hotdocs Film Festival and the Human Rights Watch Film Festival. “The Chinese art-star emerges as a stirring symbol of antiauthoritarianism – and also as the kind of magnetic, irreverent prankster you’d want to dine with, not to mention follow on Twitter,” the Village Voice said. “Ai Weiwei is captivating on camera, and the film makes the case that there is really no separation between the artist and his work,” crowed Toronto’s Globe and Mail. “Chinese activist Ai Weiwei combines the chutzpah of Michael Moore, the antic iconoclasm of Duchamp, and the humility of Gandhi,” observed the Boston Phoenix. “Let’s hope Klayman gets to make a sequel,” added The Guardian of London, giving Alison’s work four stars.

There are many more paeans to her work. Details and a trailer are available here. There’s also a Facebook page for the film here. 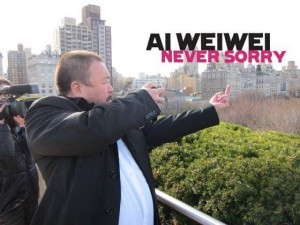 Much to the consternation of Chinese authorities, Ai Weiwei continues to generate attention. The Wall Street Journal just this morning ran a piece about his battle with authorities over a $2.4 million tax bill. Once celebrated for his work on the Bird’s Nest for the Beijing Olympics of 2008, Ai has riled Chinese officials with persistent criticisms. He was detained without charges for nearly three months in 2011, and state media reported he confessed to tax-evasion, though he has challenged the tax case at every turn. He set up a website, fakecase.com, to chronicle his battle.

So what does Ai Weiwei have to do with the world getting smaller and more wonderful? Well, this is personal. Last fall, a short time after I arrived in Beijing to teach journalism for the semester, I chanced upon a group that held weekly services, Kehillat Beijing (cleverly named website: sinogogue.org). On my second Friday night service, who should walk in but Alison Klayman, who I hadn’t seen for an absurdly long time. Alison, dear reader, has been a good friend of my eldest daughter, Becky, for about 16 years, since both girls were 12 years old and we lived in the Philly area. 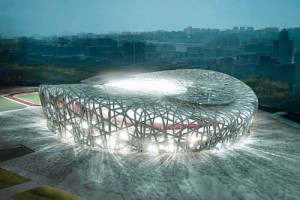 In a coincidence no fiction editor would let an author get away with, Alison had rushed to services from the airport, bags in tow. She had long before become a fan of the delightful Jewish group — a havurah for expats and visitors — while living and working in Beijing. She happened to be back in the city for some final work on the Ai Weiwei movie. Needless to say, we had a fine time catching up over a rather nice, western-style dinner that followed services.

So, count me among those eager to see the film. I can’t make the NYC premiere, but will catch it here in Lincoln, Nebraska, where it will be shown at the Ross from Sept. 7-13. It will be a highlight of the fall.