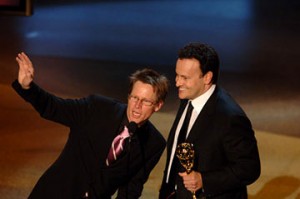 Some 38 years ago, Jim Vallely was a New Jersey college student who had a knack for humor and a nice touch with a pen, but he wasn’t sure how to put the two together. Nourishing what he recalls as “a very faint ambition” to become a writer, he’d hang about the school newspaper office. Once, we published a piece he did called “Suicide note from a dog.”

Sadly, the piece seems lost to history. That’s sad because Jim, left in the photo, today is a prolific comedy writer in L.A. His credits are stunning: writer and co-executive producer of Emmy Award-winning Arrested Development, exec producer on Running Wilde, consulting producer on ‘Til Death, as well as various producing spots on The Geena Davis Show, The John Larroquette Show and The Golden Girls.

Jim is a big deal in the world of writing and production.

And this weekend he sent me a touching note crediting the launch of his stellar career to our paper and the piece about the dog. “I was published!, and I decided then and there to pursue comedy writing,” he wrote.

School newspapers can make a huge difference in people’s lives. That’s obvious for future journalists – as employers tell us when they’re considering intern candidates. Outfits ranging from local papers to the likes of Bloomberg put such experience at the top of their list. They want to see the clips. They know there’s nothing like getting out, covering things and having to put your work out – on deadline and with an editor’s oversight — for the world to see.

But school papers also matter whether journalism is in your future or not. Writing, editing, getting a platform for commenting on the world is invaluable for anyone who plans to do anything involving pecking at a keyboard. It teaches you how to look carefully, think critically, organize your thoughts and subject them to the cut and thrust of public debate. Such skills are central to law, politics, teaching, business – really just about anything professional. It’s just also a hell of a lot of fun. 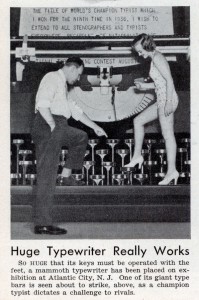 Jim went on to do standup work in New York in the 1980s. That, I’m sure, was his crucible. He honed his craft in a lot of tough rooms. He then found his way to L.A., where he’s been writing for TV for the last 25 years.

Thanks to the wonder of the Net, he tracked me down and wrote to remember our time as fresh-faced undergrads. We had spent a lot of time talking about writing, trying to figure out where our dreams would lead us. He recalls my urging him to specialize in something. “I asked you, ‘you mean, like humor …’ and you said yes,” Jim wrote. Thus, the dog piece.

Jim went on to specialize – in spades. He figured out what fit him and pursued it, despite, I’m sure, huge challenges. His gambles and his stick-to-it-iveness paid off.

But a school newspaper did mark a big turning point in the road for him. Students who don’t make room in their crowded college lives for it may never know what opportunities they are giving up. Think about that the next time you see a hilarious, award-winning show. Look, too, for Jim Vallely’s credit.