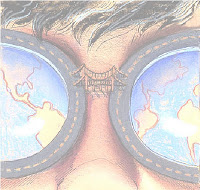 It has been almost 30 years since an economist and a business journalist used reason, logic and some savvy reporting assignments to lead me into a new worldview. Those two teachers at the Columbia Grad School of Journalism unsettled a quarter-century of woolly-headed thinking fostered by Vietnam-era radicalism, an English-major’s naivete and too much rock ‘n roll. In its place, they instilled something closer (on the good days) to a cold-eyed and clear view of how things work.

Now, as I map out a course in business and economic journalism for undergrads at the Nebraska J School this fall, the question is, can I hope to equal the work of Ron Krieger and Chris Welles?

Krieger, a union leader as a young reporter for the Denver Post, earned an economics Ph.D that led to teaching positions at Goucher College, an editor’s spot at BUSINESS WEEK and later a World Bank job. His keen grasp of how labor markets and global economics functioned shook off any sentimental red-tinged leanings that I and most of my dozen fellow students felt – at least in economic matters, if not social ones. From monetary policy to global development, Krieger knew his stuff.

For his part, Welles brought a skeptic’s eye to business. He wrote books about oil companies that rattled their cages so much that they shunned the Bagehot program, the midcareer biz-econ operation he ran at Columbia. He had a take-no-prisoner’s attitude toward business coverage, holding CEOs responsible for silliness and greed that got their companies in trouble. He later went on to serve as a hard-hitting finance editor at BUSINESS WEEK, where we wound up working together on smart stories about such luminaries as Donald Trump.

Over the course of the academic year 1980-81, this pair crammed enough business and economic knowledge into our heads that most of us went on to fairly impressive careers in the field. We made our marks at places such as the Wall Street Journal, the Asian Wall Street Journal, Institutional Investor, The Economist and the Globe and Mail. One fellow grad, Jan Wong, had been a gushy fan of Chinese communism until harsh experience in China and her economics training under Krieger cast her experience in a new light. She wrote a couple books, including the fascinating Red China Blues, about her personal political and economic evolution.

Can I hope to leave any such legacy, to make such a mark in my students? If so, I must give them a solid dose of economics that is both academically sound and real-world enough to overcome the distaste they get for the field in most classroom studies. I must show them how the Fed works, how business cycles occur, how government policies affect the economy – all in a lively way. I must make topics such as comparative advantage and supply-demand curves come alive, much as they, as journalists eventually, will have to for their readers.

This is a tall order. Fortunately, I will have some help. Friends who teach biz-econ journalism at places such as SMU and the University of North Carolina (Chris Roush publishes the excellent blog, Talking Biz News, from there) have already kindly shared their syllabi. Another friend, former Forbes Chicago bureau chief Mark Tatge, has written a textbook about the field, cleverly using pieces from the New York Times to show students how to do their work. That and works like Freakonomics will help mightily to translate abstractions into newsroom reality.

Perhaps more important, I will also have assists from the business school at Nebraska. Thanks to some foundation funding lined up by our acting dean, I will be able to get assistance for course development from economists and business instructors at the business college. I’m hoping to tap these folk, too, for guest lectures. Busy as they are, some folks there already have offered useful guidance.

For my budding journalists, this will be crucial. Even as mainstream journalism shrinks, biz-econ coverage remains essential. Outfits such as Bloomberg and Reuters are providing vital up-to-the-minute news and information that readers pay for. The Economist, for various reasons, has a lock on business-magazine coverage that hard-pressed rivals such as BUSINESS WEEK, Forbes and Fortune, envy. Successful outfits in these fields will provide opportunities that mainstream mass-media no longer seem to, and I’m determined that my students leave the class skilled enough to take advantage of these chances.

For me, the move into biz-econ was a life-changer in addition to allowing me to see the world anew. I hope I can come close to making it work in the same way for my students.