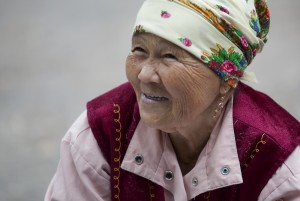 Fearlessness is helpful in a journalist. For photojournalists – especially those working abroad – it is mandatory. This is becoming clearer every day here in Kazakhstan, a place where cameras seem as welcome as American robber-barons would have been in Moscow in 1917.

Our photojournalism students are having their mettle tested here. Repeatedly, as they try to shoot in seemingly public places, they are waved off. Scary-looking security guards pop out of buildings, flailing their arms and jabbering away in Russian or Kazakh to tell them “no pictures.” The other day, as all eight students and I approached an indoor market area, a guard radioed to a colleague perched on a rooftop high above us. Roofman formed X signs with his arms to make it clear that no snapping was allowed. And all we wanted was lunch!

Fortunately, the students are rising to the challenge. They are using friendly smiles, charm and a certain fearlessness to disarm reluctant subjects and persuade them they mean no harm. Yesterday, as Patrick Breen was shooting fortune-tellers near the Green Market he managed to stave off some character who was accusing him and Elizabeth Gamez of being from the FBI and somehow helping foment a Kyrgyzstan-style revolt. They also persuaded a fortune-teller to let Patrick photograph her (in a scarf above) even though many of her colleagues protested the attention. (Patrick’s fortune looks bright, by the way, she told him).

People do usually welcome our students once they understand what they’re up to. With the help of one of our guides, Travis Beck got one of the photos attached here at a “family home,” a kind of orphanage located in Talgar, 20 kilometers east of Almaty. Director Eskozhina Tuyak, smiling over the bread, was happy to tell him about the place – called “Nur,” Kazakh for sunlight – which houses some 66 college students, some married couples and others. Some 110 people aged 4-25 live at the place, which Tuyak started in 1998 by selling her personal apartment. She worked in the state’s ministry of education for 43 years.

This is a country of many contradictions. On the one hand, people could not be more hospitable. Our waitress in an Internet coffeeshop, for instance, went out of her way yesterday to help us get a ride to our next appointments, visits to the Internews press-advocacy group and the Kazakh Stock Exchange. And folks there, similarly gracious, helped us get back on an exchange bus. We wander about at will, with no one holding us back or shadowing us. Travis was also able to photograph a group of children at play, below.

On the other hand, it’s a place where security concerns loom large, often pointlessly so. The hostility to cameras, for example, is widespread. Signs in restaurants bar photography. People in cafes gesture “no” with their hands and shake their heads when our students point cameras at them. No photographs are permitted, we were told, during trading hours at the stock exchange – only shots of the empty trading floor after hours. 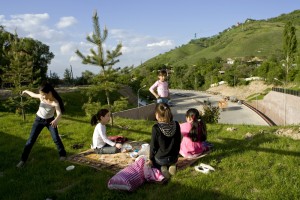 Theft is not uncommon, we’re told. Don’t hand your cameras over to anyone to shoot your picture because they’ll take a flier with your gear. And yet, the common way of getting around is taking what our kids call “random cabs,” standing in the street and holding your hand low until some random person picks you up and you negotiate a ride around the city – always under 500 tengey (about $3.25). It’s common for women to accept such rides well into the evenings, and we took a couple random cabs yesterday.

It’s as if there’s a blend of Central Asian tribal hospitality and Soviet-style state paranoia. Since the country was a part of the USSR until the early 1990s and remains heavily Russified, worries about security and a need for control seem to be woven into the cultural DNA. Why does our nearby indoor supermarket have three guards, one stationed near the entrance and two just outside the cash register area, even as one or two more stand sentry at the mall entrance? Why do buildings under construction need guards in their lobbies? Why do police cruise the streets at night, pulling people over for U turns on deserted stretches of road or checking IDs? And why is Google’s eblogger seemingly jammed?

Certainly, security worries are a big part of the American experience, especially since 9/11. Think about how guards now roam with abandon across all areas of American life and security has become a huge industry, going far beyond the airports. New Yorkers are considering putting virtually every street under surveillance. And plenty of American institutions, such as corporations and government bodies, bar press photography on their premises unless it’s under tight control. Here, though, it’s security on steroids, whether justified or not, and without the newest technology. 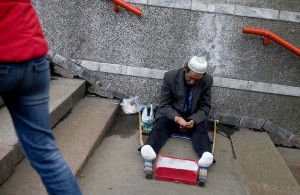 Another thing that has struck us is the lack of homeless people. This plague, rife in American and European cities alike, seems not to be an issue here in Almaty. We have seen none. Partly, we’re told, this is because people are family oriented here and take care of their own. Partly it may be because mentally incompetent people are confined by the state, as they once were in the U.S. There are a few scattered beggars – see Patrick’s photo of one unfortunate footless man – but no bedrolls in the parks or people pushing grocery carts. Poverty is an issue, to be sure, but its human face in the city seems less obvious.

So I must admire our student photographers. They are managing through these challenges, finding fresh ways to show life in this fascinating society. Our work, of course, should be helpful to the place, as we tell readers about how ordinary Kazakhs go about their days – whether they run apple orchards and brokerage operations or pray in the mosque or, as in Patrick’s photo below, play with pigeons.

As they rove around, cameras in hand, the students are surmounting all sorts of obstacles. Language difficulties, transportation challenges and persuasion of reluctant sources. It all demands a bit of nerve, and they are summoning it in spades.