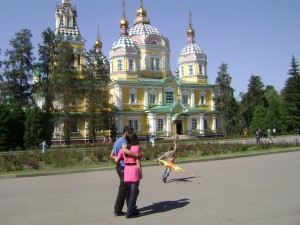 Religion seems to be a modest affair here in Kazakhstan, tolerated if not exactly encouraged. Almaty features a stunning Russian Orthodox Church, interestingly located in the heart of a park dedicated to World War II soldiers. The park, filled with oversized monuments including an eternal flame, seems very Soviet in style. And so, it’s perhaps fitting that the Russian Orthodox Church is there. It’s as if it’s making a statement about the centrality of all things Russian, whether in history or culture.

It was intriguing to spend some time in the church yesterday. Women, and a few men, would come into the ornate church, kiss icons, light candles and make elaborate signs of the cross on themselves. Most of the visitors were older folks, most looking more Russian than Kazakh. I suppose they were praying for relatives and friends and they found something helpful in visiting the icon-filled space. Perhaps the bevy of images of saints and of Jesus and the place’s general solemnity was comforting. Most seemed in need of something, an understandable thing, of course. 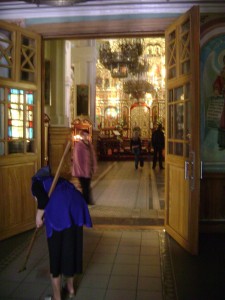 The other day, a group of us visited a mosque not far from the church. It was quite different. For one thing, we saw only one woman in the place and she wasn’t praying. Men, instead, were the supplicants and many were fairly young. There were no icons, only a wall with elaborate swirls and writing at the front. There were no chairs, only carpet for prayer (silent, but an active affair, with much standing, kneeling and prostrating). Sarah Tenorio, who took the photo below, and Elizabeth Gamez were allowed in and, as a mark of liberality here, were not required to cover their hair. We later learned that the mosque was built since Kazakhstan declared independence from Russia.

And today a few of the students are visiting the Mormon church services here. This place is far more low-key, based in the bottom floor of a nondescript apartment tower block far from downtown. There are few signs even noting its existence and, true to Mormon style, no crucifixes (they prefer to focus on the risen Christ, I was told by one of the missionaries there). The group, about 130 or so folks including a number of young Americans who incongruously call themselves “elder” or “sister,” is keen to sign up more members here. 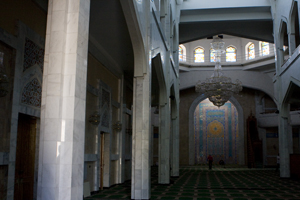 We’ve been told that the authorities here are not fond of such small churches. They tolerate Islam, perhaps because it’s such a big part of the culture of Kazakhs, and they seem to value Russian Orthodoxy, perhaps for the statement it makes about the importance of things Russian. But recently there was a campaign against a Hare Krishna group from Russia that set up a compound outside town. We were told the place is being bulldozed after some legal action, since a local developer wanted the land. One could imagine that other small groups keep their profiles low to avoid similar troubles.

My guess would be that religion has not taken as powerful a hold here as in some other Central Asian spots because of economics and decades of official atheism under the Russians. On the economic front, if the system meets basic needs and provides a bit more for the people they may not feel as keen a need for something transcendent. Kazakhstan has developed a substantial middle class, it seems, and it’s not surprising that religion would be a light affair with many of those folks. Further, one imagines that students in Russian-controlled schools were discouraged from zealous practice and religious leaders were relegated to largely ceremonial roles. 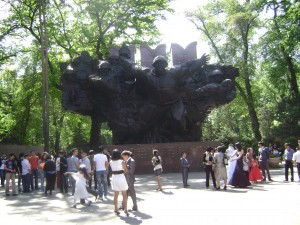 The big question, though, is whether Kazakhstan can hold firm against the Islamic tide that grips others not far from here. Muslim groups in China, Uzbekistan and even parts of Kyrgyzstan have grown quite assertive, worrying both the local systems and folks in Moscow and Washington. Russia has had huge problems with Islamic terrorists, who seem to regard it as poorly as they do the West. Will affluence, if it comes, lead to Saudi-style revivalism, where the sons of the rich look for meaning following fiery imams and even the likes of Bin Laden? Or, will downturns in the economy, if they come, lead people to extremism? With the Kazakh president here expected to pass the baton in a few years, and the economy suffering from some real-estate induced trouble lately, all sorts of things could bubble to the surface unless the transition is handled well. It all bears watching.