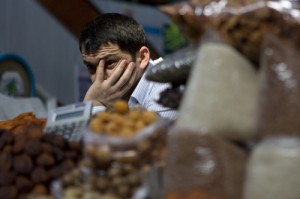 Call it a Kazakh stew (or borscht maybe?) Our opening day yesterday in Kazakhstan was marked by Third World confusion, a string of encounters with police and a short struggle with sleep in an overcrowded apartment I’ve taken to calling our Pink Palace. This was followed by a plunge into a sprawling open-air bazaar (see Travis Beck’s pix right and below and Patrick Breen’s fabulous goat head pix at the bottom of this post), visits to an ill-maintained cathedral-like mosque and a discreet Mormon church, and finally dinner with some really intriguing folks. All this in under 20 hours.

The beginning was anything but auspicious. Shortly after midnight, we all got off a wonderful Lufthansa flight where crisp, cheerful attendants plied us with free wine and spoiled us with us damp towels after surprisingly good meals. (Those efficient Germans have it all over the folks at United). Outside the gate, our hosts met us, bleary-eyed but excited after we’d been in the air or in terminals for over 24 hours straight. (This included a few hours at O’Hare and a couple more in Frankfurt’s airport, which is an overblown Ikea, decorated in bright colors and naked industrial ceilings and equipped with odd little smoking booths). After our endless time “Up in the Air,” we were like kids who badly needed naps but were jumpy from too much sugar.

Then the confusion began. Our hosts – remarkably accommodating and genuinely nice folks who all are Kazakh members of a Mormon church here – didn’t know exactly where our four apartments were. So we set out to find them and the police adventures began. First, our three-car convoy was stopped when we came upon a minor car accident and one of our drivers had to sign papers agreeing to be a witness. Then we were pulled over when another driver made an illegal U turn and was ticketed for it, a 45-minute ordeal. Finally, in two separate groups, we were quizzed on foot outside the apartments and had to produce our documents for curious police who wear really odd up-tilting oversized caps. It all felt very Soviet.

And, ah, the apartments. The first was in a crumbling Soviet-era concrete tower block where the elevator didn’t work, leaving us to walk up nine floors of unlighted steps and broken floor tiles. Thank G-d for flashlights and cell phone lights. A second place was too far away from the others. The final two were decent, though oddly appointed (the Pink Palace, in the “Deluxe” tower, features textured tinted swirls on the ceiling, dotted with little spotlights, and an inner support wall that rises to the ceiling in 10-foot high S curves. Kinda Vegas-y, but we now call it home). It has a wonderful East-facing window that overlooks a hilly stretch of the city.

After shuttling from one apartment to the next in the pre-dawn hours, we decided to change plans. We dumped the idea of four places for the 10 of us – four girls in one, four boys in the other and Bruce and me in one each. Instead, we squeezed into two one-bedroom places. Two of the boys and I share a living room and two of the girls have the bedroom in the Pink Palace. Same for Bruce. 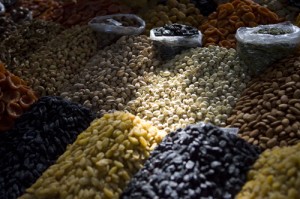 It’s actually worked out fine. As Elizabeth Gamez, Sarah Tenorio and Patrick Breen and I all chatted chummily last night, it occurred to me I’d feel mighty lonely in an apartment by myself. That would be especially true if it was a lot further than just down the hall away from the others. The only downside is we need to be discreet as we stumble around the lone bathroom at shower and bedtime.

Our body clocks are totally screwed up, understandably since we’re 11 hours earlier here than Lincoln. We are literally on the other side of the globe. We got set up in the final apartments shortly before sunrise and some of us managed just about three hours of sleep, if that, before our hosts arrived at noon to take out us on the town. Nonetheless, our visits to the street market and mosque went well. We stopped, too, for lunch in an odd place where they served a deceptively appealing pink lemonade-looking drink that turned out to be an oozy paste made with potatoes. Uck! Pastries were tasty, though.

Dinner was fascinating at the Edom restaurant. Our 10 were matched by 10 or local and expat folks, including a saucy and pleasant BBC reporter, an Uzbek, I think, and her British Al Jazeera stringer hub, a former UNL exchange student and two girlfriends who work for an agency that helps poor kids, a couple Internews gents who work to liberalize media laws here, our driver-translators, a journalism instructor here who hails from Washington state and a few other folks who had some good story-idea advice for us. Talk of politics, disabled-rights activists and the revolution in nearby Kyrgyzstan dominated my end of the very long table.
Some of the folks seemed to like making connections with one another almost as much as with us.

Almaty is exotic, to be sure. In places it resembles photos I’ve seen of Ho Chi Minh City with stretches of odd-looking shack-like houses hemmed in by high sheet-steel fences. In other places, top-flight stores offer pricey designer-name brands but the shops are often garishly lighted with a lot of neon. Signs with racy images of girls pitch perfume and such in English, Russian and Kazakh. The place is an odd admixture of Russian culture (the Russians have dominated here since the early 1900s at least) and American influences, with a touch of local flavor. Internet addresses pop up on billboard ads, showing how small the world is becoming. 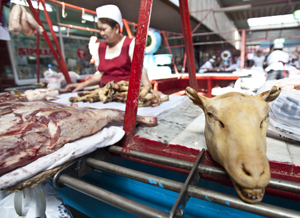 Clearly, there is a lot of money here. Fancy new buildings are replacing the tumbling-down Soviet concrete piles that still sprawl three or four stories up on many of the streets. Indeed, a big real-estate bubble here, fueled by easy lending and high oil prices, has gone bust. Our Pink Palace, luxurious by Kazakh standards, isn’t even finished, but people are living in it and renting out places to the likes of us. And the streets are jammed with Mercedes-Benzes, Peugeots and BMWs, along with beaten-up old Soviet cars. We’re told people who can’t afford to buy houses buy status cars instead.

There are lots of trees, lots of Soviet monuments (visionaries gazing into the revolutionary future) and flags marking the recent 65th anniversary of the end of World War II. The war-end celebration, last weekend, was a big deal here, since Kazakhstan contributed lots of soldiers and industrial might to quash the Germans. It also seems to give people a chance to salute the pervasive Soviet influence, which independence has apparently not diminished much. Red Stars and hammer-and-sickle symbols are dotting the city.

The place is heavily Muslim with a dash of Russian Orthodox. Islam here, the Sunni variety, is on the light side, though. When we visited the mosque, the folks there made accommodations for us – Sarah and Elizabeth didn’t have scarves, but they still were let in and allowed to take photographs. First, like everyone we had to go to washing areas in an outbuilding where we were told to use little stalls to wash our ears and tushes, then to another outbuilding where men sat in front of faucets to wash their hands and feet and, if needed, clear their noses. Then we went into the mosque, removed our shoes and were allowed to shoot pictures. Travis Beck and Patrick both shot a fellow outside who complained that they were stealing part of his soul, and then he demanded $10 (which he didn’t get).

Inside, scattered guys prayed. Their style: touching the ears, kneeling, prostrating themselves and then getting up again to repeat the standing, kneeling and prostrating – all that before a giant greenish mural with prayers on it. Overhead, a giant chandelier hung from the high ceiling and the beautiful carpets graced the floor, but otherwise mosques are surprisingly empty places, with no chairs and a curious staircase-structure next to the big mural in the front for the imam to lead group prayers.

On our way back, fortune-tellers spun their tales to individual clients in a wide park-like median strip not far from the big market area. Fascinating place, Almaty. It has the feel of what I imagine New Delhi to be like, with thriving market areas, too many people and cars going every which way. It’ll be a grand spot to spend the next four or five days.