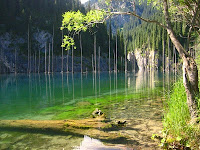 So today, the adventure begins. We head off to Kazakhstan. E-tickets in hand, bags packed, passports in our secret waistband pouches (designed to never leave our bodies to stave off pickpockets and such). This will be a once-in-a-lifetime trip for eight high-energy journalism students from the University of Nebraska-Lincoln, a colleague here and me.

But what a headache getting to this point. First there was that nasty business in Kyrgyzstan. Even though we had read up on the country, listed stories we planned to tell and developed contacts for them, mapped out a detailed travel plan, etc., the folks there decided to go and have a revolution. It’s that “hopey, changey thing,” I guess, since the economy there was in the Dumpster and corruption reigned. Bottom line for us: fascinating stories there, sure, but it’s a no-go on safety grounds.

So, we’re going next door. We’ll pop in on a country akin in size to Western Europe, a place of forbidding desolation on the steppe and remarkable beauty, in places such as the Red Canyon of the Charyn River. Ah, doesn’t that sound like something out of a fantasy! Just check out the image of Lake Kaindy on the top of this post. Much of the country, in fact, sounds like something out of “Lord of the Rings.” One imagines traveling the countryside like Hobbits on a crucial mission. Certainly, Kazakhstan sounds nothing like the place Sacha Baron Cohen satirized in “Borat,” an image Kazakhs are understandably keen to erase.

We’ve moved fast to get up to the speed on the country. Replicating our Kyrgyzstan research, we’ve reached out to contacts in the last couple weeks, developed tentative story lines and done our best to nail down an itinerary. There will be much to tell: unlike Kyrgyzstan, Kazakhstan is relatively well-off, enriched by natural resources including oil and uranium. It has modern cities in Almaty, the financial capital hard by China, and in Astana, the political capital, more centrally located. Urban wealth and rural poverty should make for intriguing contrasts.

There’s also a ton of history there that influences the place today. As a longtime Soviet Union member, until independence in the early 1990s, the place was a favorite dumping ground for Stalin. The remnants of Gulags endure not far from Astana and Russian survivors of the exile camps and their descendants still live in the area. A bit further from Astana is Semey, a place where the Russians tested nuclear weapons, leaving a population that to this day exhibits the genetic problems and deformities spawned by radioactive contamination. It’s the reason Kazakhstan has renounced nuclear weapons, selling its uranium for peaceful uses, it says.

Politically, the country is run by a former Soviet Kazakh leader who remains remarkably popular. Nursultan Nazarbayev, we’re told, has brought economic stability and a general level of comfort that has some folks calling Almaty the Singapore of Central Asia. While not as free a place as many countries in the West – with restrictions on the press and little political debate– it is nonetheless a thriving state-directed capitalist economy that seems to do right by most of its citizens. It has a stock exchange that I’m hoping to visit in Almaty and its capital, Astana, rose Brasilia-like by design at the instigation of the national leader.

Religiously, it sounds like a fascinating place, too. As far as I can tell, the people follow a modernized version of Islam. We intend to visit Saudi-funded mosques to test this theory. I suspect the radicalism that infects other stans, notably Uzbekistan, is missing from Kazakhstan. It sounds something like Turkey.

We’re not as well-prepared as I’d like to be, though, given the short prep time we’ve had, we’re better off than we might be. We have apartments reserved in Almaty, have made contacts there and in other cities we intend to visit and have a general itinerary. But we will make a lot of decisions on the fly, based on the guidance of folks we meet. Essentially, we will ask where the most intriguing stories are and pursue them. This will be a journalism of discovery.

My colleague, Bruce Thorson, is nonplussed by the lack of a detailed roadmap. His experience in South Africa and Kosovo, on prior reporting trips, involved thorough preparation and then the need to toss it all out once on the ground. As in wars, battle plans prove useless once the fracas begins. We’ll meet folks in Almaty and Astana, he says, who will lead us where the news is. And, indeed, we both have reached out to a good number of folks who are amenable to helping.

So, unless the volcano in Iceland gets in the way – a lingering cloud, ahem, on our route through Germany — we’re off shortly to Omaha, Chicago, Frankfurt and Almaty. We leave in the early afternoon today and arrive a bit after midnight Almaty time on Wednesday. United and Lufthansa will carry us literally half-way round the world from Nebraska. Should be a great ride.

One Reply to “Kazakhstan: The Tale Begins”