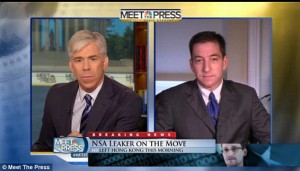 As Edward Snowden wings his way toward whoever he thinks will shield him from American prosecutors, his bizarre story keeps metastasizing. This noxious growth is now tainting the press. The latest turn: the suggestion that not only should the former NSA contractor be prosecuted but so should a recipient of his leaks, Guardian columnist Glenn Greenwald.

NBC “Meet the Press” host David Gregory today asked Greenwald: “To the extent that you have aided and abetted Snowden, even in his current movements, why shouldn’t you, Mr. Greenwald, be charged with a crime?” So, was Gregory siding with some politicians who have called for a journalist to be prosecuted for doing his job? Certainly seemed so, though the TV host did later say he was merely asking a question, however pointedly.

Have we come to that in journalism? Are we now dining on our own? Would Gregory have raised the same question to the late Arthur Ochs Sulzberger, publisher of the New York Times, and his editors when in mid-1971 they decided to publish the Pentagon Papers? Then, as now, national security concerns were at issue in the publication of explosive secret material — in that case classified material dealing with the ongoing Vietnam War.

The Snowden case is a knotty one. There’s no question for me that the former trusted intelligence analyst should be prosecuted for his crime. He betrayed his employers and violated his oaths. His acts could be considered treasonous in a time of war, albeit an undeclared war with terrorists. He should be brought to account for them.

But it’s also clear that he brought to light a practice that deserves national scrutiny. Indeed, the shame of it is that the debate hasn’t happened until now. Do we want the government reading our email or, however much buried in massive data-collection practices, scanning our phone calls? Certainly, we want it rooting out terrorist plots, using wiretapping or whatever technology works. But should it cast its net so wide that it ropes in everyone? These are important questions and, sadly, it took Snowden’s actions to bring them forward.

Snowden, however, didn’t have to blow his whistle quite the way he did. He had alternatives for bringing his case forward. He could have found a friendly congressman or senator, perhaps a libertarian who might have found the NSA practices just as dubious as he did. Questions then could have been asked and debated, perhaps behind closed doors in deference to national security. Policy could have been changed quietly. Is it naïve to think so? Perhaps. But Snowden didn’t even try this route.

Would he have broken laws in talking with an elected government official about a government program? That’s one for the lawyers to decide. Certainly, he would have spared the government the international black eye it has suffered from his leaks. To much of the world now, the U.S. respects its citizens’ rights to privacy no more than China does. But, if Snowden found a courageous legislator to work with, he might have forced changes to happen without making the U.S. look like a global snoop, hardly a beacon of freedom. 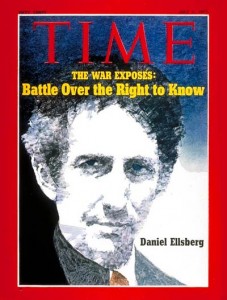 If Snowden got nowhere with the legislators, he could then have turned to the press, it seems. That was the route former military analyst and ex-Pentagon staffer Daniel Ellsberg took. He shared copies of the Pentagon Papers first with legislators and moved beyond them only when none would make them public in the halls of the Capitol. He felt they had to be exposed. Ultimately – two weeks after the Times began printing the Papers and was enjoined temporarily from doing so – a senator, Mike Gravel, did publish the documents in the official record of the Senate.

But Snowden chose otherwise, rushing outside government to make his case. He broke the laws and violated the trust of his colleagues. Whether he is prosecuted or not, history will judge whether his acts were heroic or merely treasonous. Ellsberg has largely been judged a hero. But Ellsberg had the guts to face the consequences of his actions. Unlike Snowden, he stayed in the U.S. and was tried for espionage in court. The charges were dismissed, as it turned out, because of governmental misconduct that, ironically, included illegal wiretaps on the former analyst. But the risk for Ellsberg’s act of conscience was very real.

Now Snowden will live as a fugitive, likely to spend the rest of his life looking over his shoulder. Is that heroic? Ellsberg also tried at first to stay out of the limelight, leaking his documents anonymously until he was outed. By contrast, Snowden seems to crave the attention, lionizing himself for his actions. Again, heroic? The more apt word might be narcissistic.

As for the press, the Times was right to print the Pentagon Papers. They proved invaluable to understanding how dishonest the politicians were in pursuing a war that was foul and doomed from the start. Similarly, the Guardian and the Washington Post were right in publishing Snowden’s leaked documents, even though the war we are currently fighting – the battle against terrorists – is just, is impossible to avoid and is one we must win.

The argument this time is over whether the government’s intrusions are massive overkill. Are the security services deploying a nuclear bomb when well-aimed rifles might work better? Certainly, we all want them stopping terrorist plots. But can they not just ID the bad guys and go and get ‘em without ensnaring all Americans and plenty of foreigners in their net? Do the terrorists win when we give up something as precious as privacy, the cherished right of all Americans to be left alone?

Snowden went about this all wrong. But the debate he triggered is necessary and vital and so, too, are the journalists who have brought his story to light. Gregory’s pointed question to Greenwald deserves a loud answer: no, the journalist should not be prosecuted for doing his job. Instead, the policymakers need to be held to account for falling down on theirs.

2 Replies to “Prosecute Snowden, not the press”