The Columbia Journalism Review online ran a Q&A I did with Yuen Ying Chan, one of the foremost journalism educators in China. By turns steely and gentle, smart and tough, she was a delight to talk with. It was a privilege meeting her. 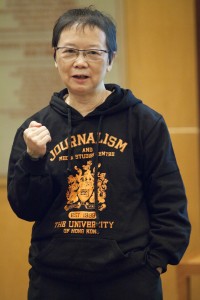 After 23 years working in New York City journalism, including a seven-year stint at the New York Daily News that netted her a Polk Award, Yuen Ying Chan returned to her native Hong Kong. There, in 1999, she founded the Journalism and Media Studies Centre, and as its director began turning undergrads and grad students into working journalists through Asia. Soon after that, she turned to mainland China, where she set up the Cheung Kong School of Journalism and Communication at Shantou University, which now serves some 640 undergrads. Chan spoke about journalism and journalism education in Hong Kong and China with Joseph Weber, an associate professor at the University of Nebraska-Lincoln who recently taught in the Global Business Journalism program at Tsinghua University, under the auspices of the International Center for Journalists.

One impression I have about China is that students don’t ask, ‘Why?’

It’s rote learning. It’s endemic. They don’t challenge authority. They are taught to listen, to follow. So that’s part of the culture, the system. It’s the worst of Confucianism, plus Communism—the authoritarian respect for authority and not challenging authority. Students in mainland China schools cram in too many courses. They have had top-down teaching—the antithesis of critical thinking—for 12 to 14 years before we get them.

Are schools of journalism on the mainland changing that, by inculcating critical thinking?

In Shantou we do. Students are very outspoken. We were able to host a lesbian activist, Helen Zia, for a week. She’s a civil-rights activist and a former executive editor of Ms. Magazine. We had an open debate on lesbianism, where Zia showed a film about relationships and talked about her own marriage. The room was packed. Shantou is different. We try to teach journalism the way it should be taught.

Which is critical thinking, seeking truth from facts, challenging authority, discipline, good reporting and writing. We do it. It’s not easy.

Do you get official pressure?

It’s not so much official pressure, but more the Chinese bureaucracy. In Shantou we can get away with more. It’s a public university but it’s funded two-thirds by Li Ka-shing [a wealthy Hong Kong businessman]. It’s almost like a privately funded public university.

What about the rest of journalism education on the mainland, in terms of promoting critical inquiry?

What are the limits in investigative reporting?

You can’t talk about Tibet; there’s no exposing the Politburo or their sons’ and daughters’ business interests; no discussion of June 4 [1989, the Tiananmen Square massacre]; no Taiwan; no Xinjiang protests [a 2009 uprising in a region in western China]—those are drop deads. And then you have room to navigate. The space is opened and closed. There are no set rules, but there is a system of censorship in place, and also self-censorship. For instance, the rebellion in the village of Wukan [an anti-corruption protest that began last year] is all over the news in Hong Kong. It’s censored on the mainland but Wukan was all over the weibo, China’s miniblogs. That was despite government efforts to censor. Reporting the Bo scandal has been banned in Chinese papers. But students can climb the so called Great China Firewall to access international websites. I can read students cynical comments in their own weibo. This is a generation of digital natives who are savvy with using information to get the information they want.

I’ve been surprised at how much the China Daily discusses pollution, which is a great embarrassment.

They have to compete for the market. There’s a tension between the market forces and the forces of authoritarianism. But it’s not just China Daily. Environmental stories, such as pollution, are on the official agenda.

What are the differences in your approach in Shantou in mainland China and here in Hong Kong on the issue of censorship?

Most of the students [in Shantou] will work in the [mainland China media] system. If they work in the system, they will have to know the rules and the boundaries. We teach them that they need to equip themselves as much as possible to push the limits. You need to be good. The better you are, the better you can deal with the limits. We try to let them know where there are limits. It’s very challenging. China is in transition. It’s full of good stories and for them to report and write about that, that’s their job. The challenge is to deal with reality, not to succumb to it, and the keep the North Star, the values of journalism. We try to do that.

There seems to be more life left in print here than in the US.

We are facing the same digital transformation. Students have to understand digital. But in a country of 1.3 billion with a long newspaper-reading tradition, even a tiny percentage of newspaper readers can sustain print longer than it can in smaller countries.

What are the prospects for your students?

What kind of work do your students do?

They do grassroots reporting on community issues. You know the scandal about overcrowded school buses? They went to do a story on school buses in Shantou. They found a 19-seat bus that was packed with 46 students. It’s on the website. Isn’t that a good story? They did another story on a flood in the city. It speaks a lot about municipal management. They do profiles. They do multimedia. That’s why they are getting jobs.

As for investigative work, when I taught a course on “enterprise reporting” at Shantou, students investigated the e-waste dump nearby that was killing the river in the area. Students worked in teams and do a lot of shoe-leather reporting up and down the polluted water. Their article was published in a leading daily in Beijing. This year, students reported on stories such as the plight of the children of migrant farmers or overloaded schools buses in the area.

Chinese students go into journalism with a lot of idealism ad a strong sense of mission. They want to speak up for people and to fix the problems in society.