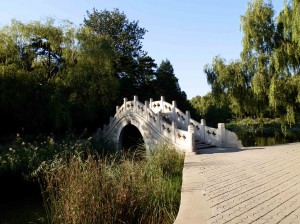 Each morning, I hop on my bike and trundle over to the journalism school at Tsinghua University. The ride takes me a bit over a mile through what may be the prettiest campus in the world. Streets lined with tall trees, dazzling colorful gardens, striking sculpture and stunning modern buildings that loom hard by hovel-like worker quarters and sleek dorms. Depending on the time, I may be joined by hundreds of other cyclists, mostly students rolling along silently to class. For an American, it’s an alternate universe.

Like much that I’ve experienced in my two weeks in China so far, my daily routine here is by turns delightful, intimidating and fascinating. When the sky is blue and the sun shines, little could be more intoxicating. When it’s smoggy and my chest feels heavy in the haze that sits just a few hundred feet away, it’s something else – LA in the fifties an LA native here told me. The tai chi practitioners doing their meditative ballet in a garden spot near a pagoda-like park building are hypnotic. So, too, is the guy playing a Chinese flute in the trees nearby. But spending 90 minutes in a bank trying to make a deposit is anything but charming – and neither is the bank guard striding up and down with a menacing baton (and this is at the center of campus!). And showers when the hot water goes out are, well, bracing.

Then there’s the food. So far, I’ve eaten fish that has stared back at me (mackerel, actually) while avoiding donkey meat and black fungus (a mushroom, I’m told), and I’ve downed lots of odd vegetables (who knew cabbage could be spiced so well that it’s actually good?) For an omnivore, this would be a delight. They put lots of everything in everything, and there have been a few things I’ve downed that I haven’t quite been sure of. For my picky tastes, it’s a challenge – though I have found much pizza, Progresso and Campbell’s soup and the sugariest cereals around at the grocery store. My teeth would not survive a year of this stuff.

It’s an adventure getting around this city of 17 million or so souls. The broad boulevards lined with towering glass-and-steel office buildings and condo complexes here do have red lights at the intersections, but they seem only advisory, especially to the hordes on bikes. It’s a wonder that there aren’t injured cyclists and furious motorists everywhere, since it’s a battle royal everywhere on the crowded roads. Yet somehow the natives are comfortable with it; everywhere, girls sit sidesaddle on specially built seats behind their pedaling boyfriends, How they stay on, looking quite contented, is a mystery to me. 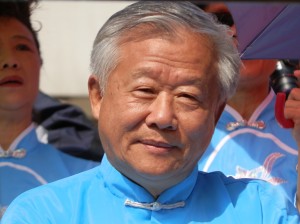 Communicating with people has been surprisingly easy, though. Somehow, the shopkeepers know how much to charge me and I know how much to pay. I know now how to order hot black tea – “hong cha” – and I can understand when they say “here” or “to go.” Pointing works just fine for the pastries at Starbucks, a haunt of expats since it has free Internet and pricey tastes of home. I have even managed in the Subway sandwich shop to get tuna subs with the fixings I like. And moving about town on the real subway here – an ultramodern graffiti-free system – is easy, since it sports lots of English, including in the announcements of stops. The only problem is that the crowds would make a New Yorker feel claustrophobic. And the scents are, well, unusual.

Beijing is cosmopolitan in a way that no other place is, I think. It seems like a city eager to open itself to the world. Lots of expats. Lots of shops, including very pricey ones, that cater to them. Apple is huge here and Adidas has a big shop. There’s a high-rise mall loaded with such places. Grocery stores here stock goods familiar to westerners (though the Wal-Mart here is like no other I’ve seen, with shouting butchers and fishmongers hawking their wares, which are spread out on counters in the multistory store). A honcho with Wal-Mart China, a friendly former U.S. Foreign Service guy I’ve spent a little time with, told me the outfit is designed to serve the local markets and I did have to look elsewhere for food I wanted. Still, there is Pizza Hut (nearly fine dining here, with long queues to get in) and French bakeries.

I am looking forward to getting a better handle on this place, which can be overwhelming at times. My students – probably the most diligent and eager I have ever encountered – will teach me a lot about it. I am keen to see the journalism they produce. And I’m thrilled about the prospect of seeing more of this at-times magical place. Forbidden City, Ming Tombs, Summer Palace – all await me once the students go on a nine-day holiday in early October. Already, students are lining up for precious railroad tickets home. The trains will be jammed and, I hope, I may have the Beijing sights to myself and just a few zillion others.