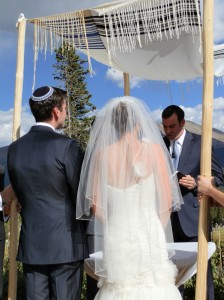 The setting could not have been more splendid. A Bluebird Colorado Day, as the locals call it. The Rockies rose in the background. Clouds scudded overhead. The sun was dazzling. And wildflowers abounded at the Breckenridge locale high in the mountains. We all were thrilled, charged with adrenaline and eager to get on with our first family wedding.

Yet, as we walked Becky, our eldest daughter, down the aisle toward her waiting groom, Donna and I both shook with excitement and nerves. We were giving our daughter away, entrusting her to the young man she chose to make a life with. Our lives forever were changing, and for all the happiness of the day, the change was tough. Even our superbly self-assured daughter quivered a bit. This was a big moment.

There was no physical handover at this Sept. 4 affair, no father-of-the-bride handshake. Instead, Ben took a few steps to escort Becky, his bride, to the chuppah just after Donna and I shuffled up under it. But in an all-too-real way I felt I was turning my child over to someone else. My pride and joy – the first of three sources of pride and joy – was stepping into a new life, one I would play little part in. It was as if she were getting on a plane and heading off, for a long time, to a place half a globe away.

In that simple switch from parents to groom the deal was sealed. Never again would this beautiful young woman be the same light-as-a-feather child I carried upstairs on my shoulder, singing, at bedtimes. She would never again be that gangly braces-wearing slip of a girl jogging around a school track with her lumbering dad. This brainy, delightful beauty would never again ask me for advice on college courses. Of course, those things disappeared years ago, gone too quickly, it seems now. But her wedding vows set them decisively in the past.

I know the cliché about not losing a daughter, but gaining a son. And I believe there is truth in that, especially since no one could be better for my daughter than Ben. Kind, attentive, indulgent of her; he’s a keeper. From the warm and respectful way he treats his parents, it’s clear he is every bit the pride and joy that Becky is. I’m looking forward to watching Ben and Becky grow together, to getting to know him even better over the years. Our family in that way has expanded, not shrunk.

But for all that, how can any father avoid feeling a bit of loss – a sense of one season following another, of the swiftly flying years? My firstborn has grown up too fast. She’s 27 already – how did that happen? Was I not paying attention? She’s been on her own since her senior year in high school, which she spent in Toronto while we moved to Chicago. She mastered the ways of New York City through college, put in a couple years on a job there as a management consultant, polished it all off by paying her own way through Stanford Law, and now toils at one of the top law firms in the world.

It’s been a heckuva a decade for her and she did it all under her own steam. I couldn’t burst more with pride about that. We all want our kids to make their own way in the world, to be confident and capable and to rely on themselves. They must do so, and we never were the kind of parents who hemmed our kids in, who discouraged them from chasing their dreams, from seeking their educations and fortunes in far-flung places around the country.

And yet, I miss the smart-as-a-whip little thing who used to win all the races she entered. I miss the high school girl who told readers of BUSINESS WEEK about the joys of her new home in Canada. I miss the college freshman who had the good sense to realize that university was more than just running around a track and who, as a result, had a wonderful undergrad time – off the track team she once pined to join.

All of that seemed to slip away anew as I let go of her light-as-a-feather arm and walked off to stand to the side at the chuppah. All that was shoved into history as Ben smashed the glass, that wonderful custom that with the powerful stamp of a foot marks a line between the end of one thing and the beginning of something new.

I will not be a hovering in-law in my son-in-law’s life. He and Becky now must create their own family, their own future as a couple. They must put distance between themselves and both sets of parents. That is the way of things. 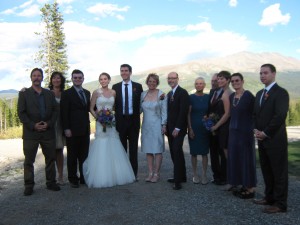 But I hope they do make time, once in a while, for us. Unlike other families who all live in the same places, we are spread about the country. Donna and I are in Lincoln (Neb.); Ben’s parents, Craig and Monica, in Denver, while Ben and Becky for now live in New York. We will see one another a few times a year, at best, I expect.

Someday, perhaps, we can all live nearer to one another, maybe not far from those stunning mountains. But we will do so in a different way. Our joys will be different ones, ones we can’t easily imagine now. Even as I sigh for the passing of the old joys, I am eager to see the new ones. The wonderful Colorado mountain ceremony set the stage for much more to come. I can hardly wait.