I’ve not yet seen Paris, but how many seasoned travelers can boast of spending time in cafes in Almaty, Astana and Karaganda? Clearly, I’ve got a leg up on veteran globetrotters.

Our three-week stay in Kazakhstan, for an eight-student photojournalism trip, was nerve-wracking at times. Reservations and credit cards were foreign ideas in some hotels and cold-water walkup flats in crumbling Soviet apartment blocks were the norm. Being unable to read street signs or tell taxi drivers where you want to go (my Kazakh is as good as my Russian) was also unsettling. And long, dusty bus rides and rickety train rides through the barren steppe gave us far too much time for reading. 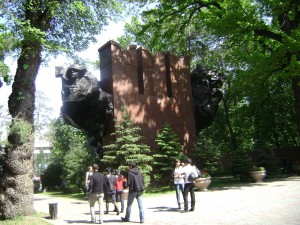 But then there was the magic of the place. There were, for instance, Almaty’s “random taxis,” where you stick out your hand and, voila, some guy happening by in an old Lada or somesuch with an invariably cracked windshield stops to whisk you away (with the help of hand-signals and mumbled Russian). There was the city’s Green Market, an immense bazaar where you can buy just about anything. There was Panfilov Park, a gorgeous island of green that commemorates 28 Almaty soldiers who died fighting Nazis (immense memorials, including an eternal flame that brides and grooms pose near on weekends).

Almaty, the financial center and biggest city in the country, is a pedestrian-friendly place of tony shops, nice parks and rising new apartment towers. A leafy, cool place that stretches downward from the snow-covered Tian Shan mountains, the city was great for a morning run. It’s a busy town. It is home to the Kazakhstan Stock Exchange (KASE), the most visible sign of the nascent capitalism that could – if managed well – turn the country into a substantial regional force.

Almaty’s financiers could help enrich a population that, despite the rise of a middle class, is still relatively poor by western standards. At $1,322 yearly, Kazakhstan’s per capita income ranks it 94th globally, just below Tonga but well ahead of China, according to NationMaster.com. By contrast, each resident of No. 1-ranked Luxembourg boasts an income of $37,500. Some 1.26 million people live in Almaty and, income issues aside, it felt like most of them were shopping in the Green Market when we were.

Astana, for its part, is an enormous World’s Fair. The new capital city, which officially became the seat of Kazakhstan’s federal government in 1998, is much more of a car place (fancy cars predominate, too, for the status-minded Kazakhstanis). Giant buildings with stunning architecture are great to look at, but challenging to get to. It’s pretty, glitzy and new. In an odd way, it has a Washington-like feel, with monumental buildings and a feeling of power, but nowhere near as intimate as Almaty. If Almaty — population over 700,000 — were New York, Astana would be D.C. 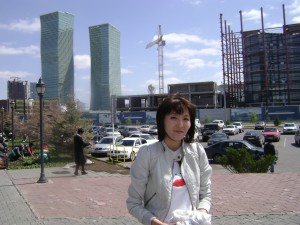 Still, Astana has huge promise. From its spanking-new Eurasian National University, where we met with journalism instructors facing many of the same issues we do at UNL, to the wonderful new U.S. embassy, the place seems fresh and new. That freshness could help sweep away the old Soviet apartment blocks over time. Some of those five-story apartment blocks, with their steel doors, security locks, overgrown common areas and sewer smells, made South Bronx highrises seem palatial. One hopes most such places will disappear in Almaty and Karaganda, as well.

In some ways, Astana is a bold, optimistic statement. Just think about the religious nature of the place. A gleaming mosque, a stunning synagogue, Roman Catholic and Russian churches coexist, with representatives sometimes meeting in a huge glass pyramid built to celebrate the world’s religions. It all reflects the ebullient attitude of the country’s founding president, Nursultan Nazarbayev, who has kept power since Kazakhstan emerged from the Soviet Union in 1991. His long reign has been helped by the nation’s vast oil and mineral riches (despite sometimes questionable elections, he seems popular and the big question mark over Kazakhstan’s future is who will come next once the 70-year-old leader steps aside).

Then there’s Karaganda, the regional center where we spent our final week. There’s something tragic about the place, probably because it was shaped by the KarLag system, part of Russia’s Gulag internal-exile system. Many people in Karaganda, it seemed, had ancestors connected in some way to the KarlLag, as prisoners, exiles or guards. And folks there, even the Russians, still seem suspicious of Russian things – most notably, blaming rockets launched from the Baikonur space base for headaches, high blood pressure, joint pain and weather changes.

Outside of Karaganda, we visited the village of Dolinka, where barracks and other buildings from the KarLag remain. The place seemed desperately poor to Western eyes, but residents don’t seem to feel that way (and there were plenty of satellite dishes on ramshackle houses). Indeed, I’ll never forget the young Russian college student who was appalled at my suggestion that it was a poor town. Her friend lived there, she said, and didn’t think it poor at all. Poverty, it seems, is relative (though running water, heat and the chance to get an education would seem to be handy universal barometers).

Karaganda is a place where Peace Corps folks and missionaries are reaching out in earnest to the local population. Saving souls or helping people think well of America is certainly not a bad thing. Already, the public seems enamored of things American, as reflected by the constant stream of music videos in cafes and restaurants, as well shop names (U.S. Polo Assn. has an outlet there). College students in an English club, which is helped along by U.S. aid, were fascinated to hear us talk about the U.S. Western cultural elements dominate: I’ll never forget the boy in Dolinka, about 10, who strummed his crude homemade guitar and talked about Pink Floyd. 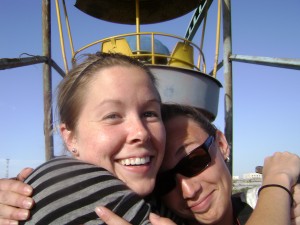 Perhaps my favorite memory of Karaganda will be the city’s sprawling downtown park. There’s a delightful amusement park, where we challenged our nerve on a rickety old Ferris Wheel that looked like it hadn’t been oiled since the fall of the Soviet Union. And one of the students, Megan Plouzek, and I got to run an impromptu marathon around the park (14 circuits approximated 26.2 miles, and I managed five while Megan logged about eight, covering more than 15 miles). The marathon was the brainchild of a local American former college athlete now working for a missionary group, and drew about 15 competitors.

Kazakhstan seems very much a country still emerging. Its economic system, dependent on natural resources, needs to diversify. Its educational system, despite such dubious features as college students occasionally paying teachers for grades, offers a way up for the people. Its government-funded foreign-study programs, which pay full-freight for students who qualify in exchange for five years work back in the country, represent a smart bet on the government’s part. 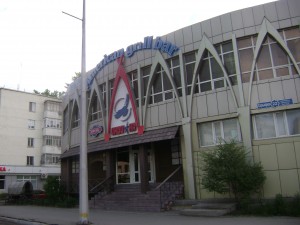 But I believe the country will make a mark globally over time. Already a regional powerhouse in Central Asia, it could ride its oil wealth and strategic location between China and Russia to great things. I suspect Americans will hear much more about the place in coming years, and it makes me feel like we got a ground-floor view. Paris can wait.