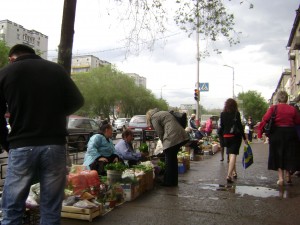 As we prepare to leave Karaganda, a 75-year-old city whose residents include a large number of survivors of Stalin’s KarLag internal-exile system, a few things stand out. There is a hardiness to the people here, bred perhaps by a history of fighting against everything from the weather to bureaucrats and worse. There is also a tendency to cut corners with few standards, whether in putting up or refurbishing buildings or in buying one’s grades in university. And there is a keen interest in other cultures, particularly the U.S.

On the survival front, we talked with remarkable people whose histories are both chilling and admirable. We met a woman whose parents survived the most absurd imprisonment in the KarLag here – her father simply because he was a German in the Ukraine during WWII and her mother because, at 18, she told someone that German sewing machines were better than Russian ones. The woman, now in her early 60s, went on to train as an accountant until she retired. Her husband, a Soviet Army veteran, at 67 works his small farm plot to raise the family’s food and boasts muscles far bigger than mine. Chillingly, his wife said her whole village, Dolinka, is a graveyard from indiscriminate killings in the KarLag days, to the point that her husband has turned up human bones as he has tilled his ground. (See Megan Nichols, with camera, and Megan Plouzek, below). 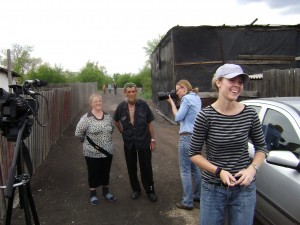 There is some nostalgia for the Soviet days here. College students told us that their parents yearn for the stability of that era. And one of our guides said there was real tumult for a couple years immediately after the collapse of the USSR, with both her parents losing their jobs and much unemployment hereabouts in the gap between the state-run society and the emergence of capitalism. Indeed, even the college students said they believed things were better in schools then, as they point out that salaries for professors are so low now that buying grades is commonplace – we’ve heard that cheating on exams is similarly universal. They believe the Soviets held students to a higher standard.

And yet, there’s also some resentment toward the Soviets. Russia still launches many rockets here from its Baikonur launch area. Intelligent people are convinced that the repeated launches give them headaches, as radioactivity or toxins fall to earth. They believe, too, that the rockets have upset the weather, making for spring days that start out sunny, turn wet quickly and then turn back to good weather. They argue that the Soviets once paid to compensate for health problems from the rockets, but don’t any longer. This distress over seeming Soviet exploitation of the area seems to echo the feelings of people in another part of the country, the Semey area, over nuclear testing that left a legacy of environmental disaster and cruel deformities among residents and their children. 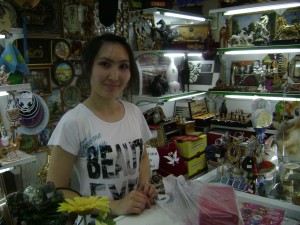 The ability to survive all sorts of abuse marks these people, though. Economically, Karaganda is a dramatic case study in an overwhelmingly small-business oriented culture. Street vendors hawk toys, food and clothing. Underpasses beneath the city’s main roads are packed with little one-person shops, booths and tables. One walks into modern retail complexes that house collections of such one-person shops, often with tiny stores subdivided into sections. We saw, this, too in Astana in convenience stores. Here, one intriguing-looking building housed a bevy of small merchants selling hardware of all sorts. It’s a peddler culture.

We have seen this even in our latest hotel. We’re staying in the Hotel Karaganda, a classic-looking old hotel now undergoing rehab. We checked in and paid at the desk but then were sent upstairs to our room on the third floor where a woman sitting at a table entered us in her book and led us to our room. It appears as if the hotel is subdivided and this woman oversees her collection of rooms as a sub-letter. The second floor is filled with similarly sized rooms, each with a separate merchant. We’ve noted that most of these merchants are women, and our guide said this has been a longstanding way women earn a lot of the income for the family – in addition to doing all the traditional jobs of mothers and wives, such as cooking, cleaning, etc. 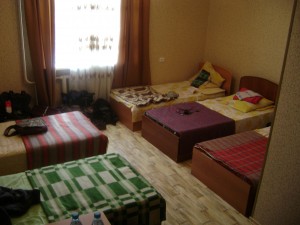 There’s a great need for travelers here to roll with the punches. Reservations can be difficult or even impossible at some hotels, sometimes requiring a payment. And terms can change quickly – we told the folks at the Edem, our first hotel here, that we would definitely stay through last Thursday and probably would stay through Sunday. On Wednesday, I learned they had given away our room and we had to move out on Friday. Then, when we moved to the Hotel Karaganda, our translator had booked two rooms with six beds in all. When we got here, we found just one room with five beds. Fortunately, there are only five of us and the two girls are tolerant of the inconveniences of sharing a small room with three guys – at least for two nights.

If the country is to develop a tourist industry – which it could do – a lot of infrastructure and cultural changes will have to be made. They could start by accepting credit cards and using computer reservations systems in the hotels. Paying in cash for everything – when ATMs limit you to 30,000 tenge (about $200) per day – is a real hassle. Plastic is much more commonly accepted in Astana and Almaty than in outlying regional spots like Karaganda. What’s more, the physical plant can often be challenging – with too few outlets, or outlets hanging out of walls. We’ve been told repeatedly that the construction of even the gleaming new buildings in Astana leaves much to be desired; already, at least one major new building collapsed because it was poorly built, we heard. 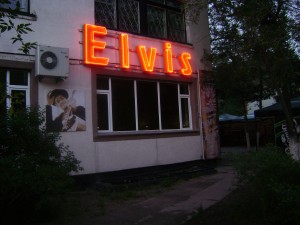 Finally, there is a real passion for things from other cultures here. The U.S. particularly is held in high esteem. Rock videos from the U.S., along with knockoffs done by the Russians or Kazakhs, blare from screens in restaurants everywhere. A club named Elvis seems to be a big draw, complete with its pictures of Dylan and the Beatles. Pizza is a big dish here, and we’ve been regulars at the pricey Assorti restaurant in the high-end City Mall and at a smaller cafeteria-type place where we get Margherita pizza. The other day, as we struggled to order, a high-school boy came up to help, using English he had improved by recently spending time in Michigan in an exchange program. People here do seem happy to help us, showing a spontaneous hospitality and graciousness toward strangers that one would be hard-put to find in America or elsewhere — though service in the restaurants can be pathetic, with dishes rarely arriving at the same time for all guests.

The U.S. is boosting its presence here. Peace Corps volunteers busy themselves in English-training classes and HIV-AIDS educational efforts, and the U.S. will be stepping up the number of them in the country substantially. There are now about 150 or so. There are also missionary groups active here, ranging from the Mormons we met in Almaty to a group of evangelicals in Karaganda who operate a feeding program for kids, many of whom are children of alcoholics, as well as an English-training program and a church.  A delightful lady from South Carolina who has taken in five young women who don’t have parents, works with the group. She and a friend helped put together an impromptu marathon this morning that drew about 15 people, including Megan Plouzek and me (I managed just 10 miles or so, while Megan did at least 15).

We ran around a park that demonstrates the curious state of the country. About half of the park is relatively well-maintained, with nice stone and dirt paths and a pleasant amusement park featuring a Ferris Wheel and other rides. People work out at spots around the park, using old playground equipment. Another half of the park, however, is overgrown and includes an abandoned-looking lake as well as rusting picnic spots. It appears that the place may have been well-kept in the old days, but has been largely ignored for at least a couple decades. Like much of the country, it seems to be both promising and in need, a place of great potential that has been both scarred and helped by its history.