Two very different stories that slipped into my feeds this morning shed telling, if unsettling, light on the state of business journalism. Indeed, the tales of Suzanne McGee, an author and longtime Wall Street Journal reporter now working retail in a Banana Republic store, and Julia Angwin, a fired and rehired editor at an online startup, are curious statements on the health and challenges of our field today. 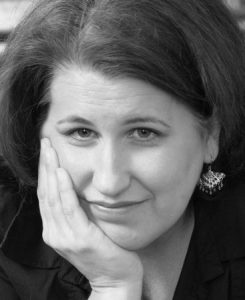 McGee, 57, had a distinguished career at the Journal for 14 years. She toiled in her native Canada, London and New York for the paper, bringing to bear her prior experience working for an English-language newspaper in Japan. After the trauma of 9/11, when she was working near Ground Zero, she left the Journal to become a corporate writer for an investment management and research firm. In time, she left there, freelanced for various big-name publications and then wrote a notable book about the 2008-09 financial crisis, “Chasing Goldman Sachs.”

So why is she now folding clothes and helping customers, even occasionally sweeping the floor, at a retail outlet in a shopping mall in Providence, Rhode Island?

The answer is likely quite complicated. Why does anyone slip from a great height professionally to wind up pinching pennies, to working for what likely is minimum wage or not far from it? Lots of reasons, both professional and personal, could enter in.

But McGee shared some thoughts with Providence Journal columnist Mark Patinkin. He shared them in an intriguing piece that sketches out this distinguished reporter’s troubling career trajectory. It doesn’t answer every question, but does help us understand a few elements.

First, there’s the professional part – McGee was doing okay freelancing, especially after she moved out of New York to lower-cost Rhode Island. But then a regular $4,500-a-month gig with The Guardian ended in about 2016, when the paper trimmed ties to independent contractors (though she still did some work for the paper afterward, with a byline as recent as August 2017). The loss of that steady paycheck put a dent in her finances, a dent big enough that she avoided even opening a credit card when she was pitched one at the Banana Republic outlet where she now works.

Patinkin reported that McGee still gets offers to freelance. But the pay is pathetic, $125 or less for pieces on subjects such as where the markets are headed – this for a savvy, experienced journalist with lots of insights to share. Three decades ago, McGee broke into journalism with a piece for a Canadian paper that paid $200 for it back then. Clearly, the numbers aren’t going in the right direction and Patinkin noted that McGee’s career path in part reflects tough times in journalism.

Then, there’s the personal part. McGee was extraordinarily lucky on 9/11. She was due at a conference that morning in 2001 atop the north tower of the World Trade Center. But by happenstance she got there an hour late, arriving just when the second plane hit. After the horrors of being at the focus of that disaster, however, the migraines she was prone to worsened. All that, it seems, led her into PR, to freelancing and ultimately to Providence.

McGee told Patinkin she’s not done with writing. Indeed, it’s ironic that a piece she did in July for the Wall Street Journal focused on a well-heeled and successful Morgan Stanley money manager. Moreover, she has another book in the works and she and a friend are looking into starting a business writing personal histories for families. A friend of mine in Omaha works in a similar business, Legacy Preservation, so that line may have potential for her.

In the meantime, folding clothes seems like a low-stress way to keep the bills paid. And she told him that her story is about both renewal through change and the dignity of making ends meet.

On another front, there’s Julia Angwin’s peculiar tale. Angwin was a hard-charger at Propublica and The Wall Street Journal, where she helped the paper win a Pulitzer Prize. Armed with a B.A. in math from the University of Chicago and an MBA from Columbia, Angwin had left those news outlets to help create a news start-up, The Markup, that would cover technology with investigative and data-driven journalistic techniques. Last April, she was fired after differing with the executive director, a cofounder of the site, over the cofounder’s suggestion that the site advocate against tech (the cofounder, Sue Gardner, disputed that, according to The New York Times, citing leadership issues on Angwin’s part. Gardner also wound up leaving).

But now, Angwin is back at The Markup. She has several distinguished journalists by her side, including most of those who quit with her. And they expect to launch the site by year-end. It is backed by a host of nonprofits, principally the Craig Newmark Philanthropies, but also the John S. and James L. Knight Foundation, the Ford Foundation, the John D. and Catherine T. MacArthur Foundation and others. They all chipped in about $23 million to get the site going.

The Times account leaves a lot unanswered. The paper reported that Angwin and six of the seven staffers who quit in support of her are all back and were paid while they were out. Indeed, they had continued to work on pieces the site will produce, meeting roughly once a week in Angwin’s living room in Harlem.

So had they really been fired? Were they made whole after returning? What was the fracas all about anyway?

The $23 million that the backers anted up could buy a lot of good journalism for a quite a while. One of the tales that would be fascinating to hear is just what came off the rails at The Markup in the spring and what put it back on track. That may take an outside journalist’s work to tell.

Still, it’s encouraging that even as much of mainstream journalism struggles – driving some folks to work in shopping malls – opportunities continue to arise in other areas. These areas are not dependent on advertising, the loss of which to online outfits such as Facebook and Google has been killing news organizations nationwide. Such startups, tumultuous as they may be, likely will offer a better future for business journalists alongside of or as substitutes in time for today’s big publishing names.