What words come to mind when you look at the image from the latest cover of Bloomberg Businessweek?

For my Reporting 1 students at the University of Nebraska, the words include “amusing,” “comical,” “creative,” “clever,” and “intriguing.” Most of the 30 students in the two sections of the course liked the image and thought it just fine for the book. They would agree with the folks at The Atlantic who suggested it was “edgy.”

The enthusiasts offered other terms, too. “Fun,” “simple,” “funny,” “different,” “unique,” “surprising” and “attention-getting” were among them. Some said it would encourage them to buy the magazine if they saw it on the newsstand – which, of course, is what a cover should do.

“I love this cover,” said one student, who at 23 is a couple years older than most of the others. “If I saw the magazine, I’d grab it. I love the tie-in. It’s definitely an attention-grabber.”

Another concurred, adding a thought about the cover language. “If the title was about a merger, there’s no way I would pick it up. This I would pick up,” she said.

Many found it funny. “It’s fun. I like the design. It’s a mature joke,” she said.

Of course, opinion wasn’t unanimous. A solid minority, including some who found the image entertaining, thought it “inappropriate” for a national business magazine. Some even worried about kids seeing it on the dining-room table or newsstand. Two found it “distasteful.” While saying she found it “slightly inappropriate,” one hurried to add that she was not offended.

And some were just perplexed. “It’s just a couple airplanes,” said one. “Airplanes can’t have sex.” Another said he couldn’t get the image at first, since it looked like a couple planes colliding or flying in tandem. And one, blushing, said the word that came to mind was “sexual,” and she added that the idea was “disconnected.” She asked, “why refer to two plane companies as sexual?”

While most students in this sophomore-level class thought the image was a winner, some faculty thought it, well, sophomoric. Echoing the blusher, one sixtysomething prof puzzled over the idea that everything nowadays seems to be cast in sexual terms, especially among folks south of 25 (or, I’d add, south of 40). A longtime newspaper photo editor-turned-teacher argued that manipulating photos just isn’t kosher even if it’s dubbed a photo-illustration (which this wasn’t) because the technology makes the images too believable.

Some, by contrast, thought the image just fine — so long as it suited the target audience. One, who led the art designers at New York Newsday and The New York Times before returning to Nebraska to teach, was reminded of provocative covers Newsday would run to pop off the stands next to the New York Post and the Daily News. And another, a veteran of the New York bureau of the Miami Herald, thought this would, indeed, help the magazine stand out, adding that images of humping animals are not uncommon, so why not? 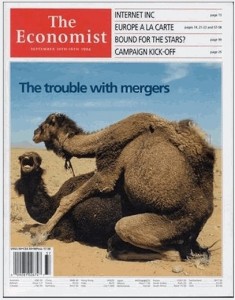 Outside of school, a friend at National Journal volunteered this (sans capitals, in a Facebook exchange: “it’s funny, it’s original, it makes the point instantly, it’s not actually icky (planes don’t really have sex, people!), and it makes me much more inclined to pick up the magazine than photo of a white dude in a suit or a photo of an airport. sometimes the worthiest stories on the most important topics are really hard to coverize, and i’m sure the writer is glad they found a solution. i wish i had more ideas like this for national journal.”

When I argued that the image might fit The Onion but not BB (or BW, as we veterans prefer), he added that we might see such an image on New York, Slate or The Economist. He might be right about that, since The Economist proved even more edgy, with camels — back in 1994. Of course, that was before the British pub became the force to beat in business magazines and, maybe, had less to lose.

So, gentle reader, what say you? Does an image of jets in flagrante suggest witty, smart, authoritative and sophisticated? Or is it just a ripoff of The Colbert Report and The Daily Show that offers sass instead of style? Does it suggest hip or, rather, desperation to look hip? In the end, do boinging Boeings reflect well on a national business magazine?