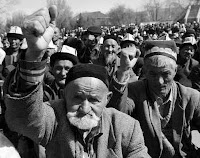 Who would have thought a revolution was in the offing? But the unexpected upheaval and government ouster in distant Kyrgyzstan is making us sit up and take notice in Nebraska.

A colleague and I have been preparing for several months to take eight students there for a reporting trip. The 20-day stay has been designed to produce a book and Web site entries, giving our kids a chance to photograph and write about the country.

At this point, we’re scheduled to depart for Bishkek May 9 and return at the end of the month. Tickets have been lined up, lodging arrangements made, contacts put in place. The kids have been reading about the place, reaching out to Kyrghese and even developing stories on immigrants from there in Lincoln.

If it were just me and Bruce, our main photography professor, we’d go – like planeloads of other journalists who have rushed there. We’d be apprehensive, of course. But as newsmen, who could resist such a story? The chance to document the post-revolutionary rebuilding, to tell the story of what drove people to toss out the regime, to look into what this means for the U.S. (which counts on the country as a major transit point for troops to Afghanistan) – all that would be too enticing to avoid.

But we’ve got eight students to care about. These kids, some still in their teens, say they want to go – even if some do cast aside the machismo of their age and confess to apprehensions. They, like us, are newshounds after all. But, unlike us, they are also kids – youngsters with parents who couldn’t care a fig about a big story, but care a lot about safety. We, too, care about the kids’ safety – above all else.

If we had to make the call today, it would be problematic. The U.S. State Department on April 9 issued a travel alert urging Americans to defer visits to the place. The military contacts I have made at Manas air transit center say to hold off. The president hasn’t abdicated and it’s not clear whether he’ll try to regain power.

So why is this problematic? Isn’t it a no-brainer to not go? Well, an alert is a step down from a warning – with a warning by State, we don’t go. That’s university policy. Oddly enough, a group from our J School can’t now go to Cozumel for a planned visit because State has a warning in place about Mexico – though the drug killings are a continent away from the beaches. With a mere alert from State, however, we would have the option of still going.

What’s more, the U.S. State Department officials say things are getting better in the country. Asst. Secretary Phillip J. Crowley, meeting with reporters in the daily briefing on April 9 said “the situation appears to be improving in Bishkek. We note today that police have been deployed. There is still some violence, but order is gradually being restored.” Specifically on the local press there, he added, “We also welcome relaxation of recent restrictions on media coverage there.”

Still more confusing is the timing. By the time we got there, in early May, the Kyrghese could be singing kumbaya in the streets. The alert could be history. In three weeks time, the government could be picking up the pieces and planning the election it says it wants in six months. The stores, damaged by looting, could be rebuilding. And the Russian and U.S. leaders could be adapting to the new regime. We’d be fine, indeed embraced as we’d document the changes. Reporters there now have had wonderful access and that’s likely to grow.

(The geopolitics are fascinating, making this a rich story. There’s some suspicion that the Russians urged on this upheaval, for instance. Certainly, they’ve welcomed the new leadership enthusiastically, with a call between Putin and the new acting leader, Roza Otunbayeva. The Russians don’t like our transit base, since they have a base of their own there – making Kyrgyzstan reportedly the only country where both the U.S. and Russians have military bases. Moscow ran the country until the early 1990s and nostalgia for those days may be fueling the current popular sentiment. The U.S., by contrast, is grudgingly accepting the new order and is a bit late to the party.)

(The country is not unfamiliar with revolutions. The ousted president, Kurmanbek Bakiyev, took power in 2005 in the Tulip Revolution. He tossed out the prior president, Askar Akayev, who has some interesting things to say about his successor and the country’s future.)

For us, the go/no-go decision won’t be made by Bruce or me. Our academic sequence head, our dean and university policy will dictate our course. It would surprise me if those folks prove willing to subject our kids to the risks involved, even if they are radically diminished. I’m not keen on subjecting them to such risks, no matter how big the story. Being responsible for myself is one thing; caring for eight kids is another.

We’re considering a Plan B, and we need to make a call in the coming week. This could include visiting nearby Kazakhstan and, if conditions permit, popping in on Kyrgyzstan. For now, though, the situation has us on tenterhooks and has the kids paying attention to a distant spot and complex political maneuvering. Already, they’ve learned something, regardless of how our travel plans turn out.

4 Replies to “Kyrgyzstan — here we come?”