Well, it won’t be Kyrgyzstan after all.

The State Department took the difficult decision out of our hands and slapped a travel warning on the country. University of Nebraska policy dictates that we don’t go somewhere with a warning label on it. So Bruce Thorson and I will take our eight journalism students next door to Kazakhstan.

We’ve got two weeks to figure out an itinerary, a list of story ideas to pursue, and all the logistics that go with it. Plus, we’ve got to educate ourselves on the place, coming up to speed fast. We’ve got to learn about things like Navruz, a spring equinox celebration depicted in the wonderful Reuters photo above.

You’d think we were in the news business!

This is, of course, a good thing in many respects. Something happens and your editor says, “get on a plane and get the story.” You rarely have time to do more than a quick Google search, make a few calls and pack your luggage. That’s the way it can be in the biz.

So our students are getting a taste of the chaos that is life in journalism. News happens and you have to be there, ready or not. And, of course, you’ve got to produce well-informed, lively and – most of all – accurate work.

On the other hand, rarely do journalists have to worry about shipping over teams of 10. Everything from accommodations to parceling out story assignments gets far more complicated this way.

Where will we go? Who will go where? Who will Bruce take? Who do I take? While we’ll be hashing out a lot of this in coming days, before our May 9 departure, I suspect we’ll be still hashing on the long plane flight.

Happily, we’re getting some sophisticated help. We’ve been in touch with news folks from organizations as diverse as Reuters, the New York Times and AP about Kyrgyzstan, and folks there have a sense of what’s newsworthy about Kazakhstan, too. So they’ll help. 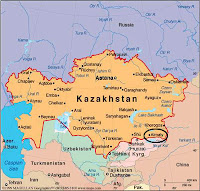 Sheri Prasso, a former colleague at BUSINESS WEEK, also may know just about everything about most of the world’s interesting places. One of the more well-traveled journalists I know, Sheri kindly talked over some story ideas with me a few days ago. She also gave me the lay of the land about what sounds like a fascinating place.

This will be complete with the remnants of gulags, a dried-up Aral Sea that features stranded boats and an oil-rich country that must steer a tough course between China’s economic prowess and Russia’s ingrained cultural and political influence. The place also produces uranium for the world but – given an awful legacy as the site of Cold War Soviet bomb tests – abhors nuclear weapons. It’s been a favorite of the non-proliferating Obama Administration lately as a result.

We’re told, too, that the cities there are fascinating. Almaty, the business center, is as pricey as NYC and perhaps even more cosmopolitan. Astana, the centrally located capital, is Central Asia’s Brasilia, a town designed by top global architects and built in the middle of nowhere to serve beautifully as the seat of government.

Indeed, in many respects Kazakhstan sounds like the Singapore of the region, a place that shuns some western-style freedoms but where prosperity makes people comfortable. It’s a place, too, that carries its Islamic history lightly though Saudi-funded mosques may make for fascinating visits. And it’s a place where one of the tastiest national dishes includes horsemeat as its main ingredient – this will be a different experience.

We’ll be learning a lot in coming days about the place. The crash course will be fascinating and the trip even more so.