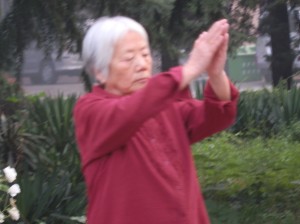 People have for eons, of course. The practice seems to provide a way to quiet busy minds, shut out the frenzy around us and restore a sense of calm. It also seems more necessary than ever these days, given the blizzard of distractions – and electronic addictions – that confront us.

But the question arises: what exactly is meditation? Further, what practice is best? Further still, are there forms that can be harmful?

When I was younger and practiced karate, my absorption in the katas felt like a form of meditation. The dance-like movements required concentration and focus, but, with practice, grew to be effortless. There was something liberating mentally and physically about the routines – especially when done in groups. The forms seemed to pull together body and soul, perhaps in a way similar to what athletes feel at times. 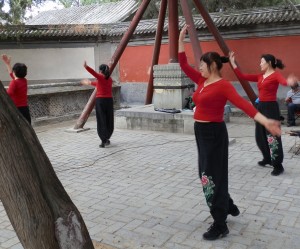 I have seen the same sort of absorption on the faces of people here in China practicing tai chi. Even as they move in those ballet-like steps, with their eyes open and apparently taking in all that’s going on around them, they seem to be somewhere else mentally. They are engaged, body and mind. If I had more time here, I could easily take up the practice.

Similarly, at meditation sessions in my gym in Lincoln, Neb., last year, I found the sense of calm marvelously refreshing. That practice involved someone chanting hypnotically on tape. We also had the help of sounds teased out of a group of large and small crystal bowls. The pleasant background noise was transporting.

These days, as I head out in the mornings for solo runs, I sometimes go to a place like that. The “runner’s high” combines a sense of peace with exhilaration. It’s a wonder to be alive once those endorphins kick in, with all that oxygen whooshing into one’s lungs. The sky seems bluer, the sun brighter. The frustrations of the day melt away. Nagging thoughts vanish. 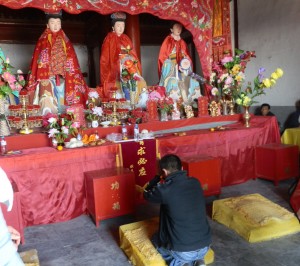 I wonder if people who pray regularly feel the same paradoxical mix of exhilaration and calm. People here in China bow and kneel in concentration before various Buddhas when they go to their temples. It’s impossible to know what is going on in their heads, of course, but there is a sense of calm and focus about such practices. These folks seem to be getting in touch with something outside – or deep inside – themselves. Call it plugging into a sense of sacredness, perhaps tapping into powerful sources.

People who practice Transcendental Meditation speak of the experience in much the same terms. Indeed, one fellow I know in Fairfield, Iowa, attends group meditation sessions regularly because, he says, it’s simply a pleasure for him. TM’ers are pressed to go to such sessions, on the claim that power radiates out from the group, the so-called “Maharishi Effect” that brings peace into the neighborhood. Who knows if such claims are true? But certainly it seems likely that few people would repeatedly go to the Golden Domes in Fairfield to engage in meditations if they weren’t pleasant.

But is TM superior to meditation in a gym or tai chi or karate katas? Does it take you to a deeper or more meaningful place than, say, the psychic spot where monks singing in monasteries go? Is it any different from what whirling dervishes feel or native Americans experience in sweat lodges or even in drug-assisted religious ceremonies? How does it compare with what Hasidim feel chanting the Amidah weekly? Indeed, are all such practices really no different from listening, enraptured, to a favorite symphony or even singing along with some toe-tapping rock and roll? 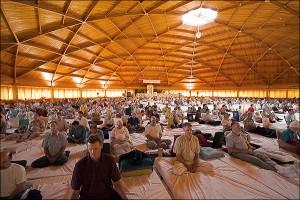 Moreover, there’s the issue of whether the benefit is a passing thing. Sure, meditation can be pleasant, but so is sex. Alas, the benefit is all too short-lived (though repetition surely helps!) Does meditation lead to an enduring sense of mental discipline, an internal relaxation? Or is it a fleeting thing, gone the moment one leaves the lotus position? Advocates argue it gives them a sense of focus that, among other things, helps them succeed on Wall Street, in Hollywood or in a variety of businesses that meditators have gone into. But would they be winners even without the practice?

Then there is the potential downside. Critics say repeated or prolonged meditation sessions – sometimes as long as six hours at a sitting in the TM Movement – spawn all sorts of problems. Some who have broken with the movement complain of feeling incoherent, of winding up unable to focus their thoughts, to stay attentive to tasks. Longtime meditators are easy to spot, they say, because of a faraway look in the eye that is anything but healthy. Is it possible that the practice rewires one’s brain in ways that could be dangerous? Or do such practices just attract people whose faulty wiring needs more than meditation to set it right?

I will deal with these issues in my forthcoming book on Fairfield, the U.S. home of the TM Movement. In the meantime, dear reader, please drop me a line to share your thoughts. I can be reached at jweber8@unl.edu.

2 Replies to “Something to meditate about”