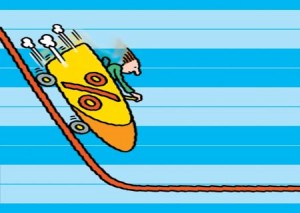 Wall Street’s jitters about the durability of the economic recovery are beginning to get worrisome – at least to investors. The question is, however, are all those flashing yellow lights really portending another economic plunge, a so-called “double-dip?”

My answer: nope. It seems more likely that the market’s enthusiasm for the recovery just got ahead of itself. Call it another dose of irrational exuberance or, more likely, just excessive exuberance. I suggest that the latest reversals are nothing more than a predictable correction, not an ugly omen. Indeed, I’m reminded of economist’s Paul Samuelson’s hoary trope, hailing from a Newsweek column in 1966, that “Wall Street indexes predicted nine out of the last five recessions.”

Let’s look at the numbers. The S&P 500 index, which closed at 1,095.31 on June 22, has slipped 11.1% from its April 23 peak. On its face, of course, that drop seems big enough to rattle cages from Manhattan to Manchuria. Northern Trust economist Asha Bangalore, who has argued that the S&P 500 index is a “leading indicator par excellence,” pointed to a smaller decline in the index – less than 7% — in early 2008 to suggest that a “rough ride” was in store that year.

Of course, she was right. But, as with any economic question, it would all seem to boil down to timing and perspective. If we pull back the camera to take in a broader picture, the S&P 500 has been on a tear for nearly a year. Between the middle of last August and its late April high, the index climbed 24%. True, the 1,217.28 point peak in April was a long way from the nosebleed pre-recession October 2007 1,565.15 point. Still, that 24% rise over just nine months would seem to make a correction all but inevitable. Indeed, Bangalore herself has noted that the S&P 500 has given off “false signals.”

Pointing to the dazzling climb of recent months, some analysts have marshaled data to show, in fact, that the stock market has been wildly overvalued. The folks at Smithers & Co. contend the overvaluation tops 50%.

Out in the real economy, the rebound from recession certainly has come nowhere near the market’s lofty expectations. After plunging 6.4% in early 2009, the U.S.’s gross domestic product eked out a 0.7% annualized gain last spring, a 2.2% summertime rise and then leapt 5.6% in the winter quarter. Since then, GDP growth has slowed, notching a 3% rise in the first quarter of this year. Does this justify a 24% gain? A cooling, reflected in the market’s latest slide, seemed baked in the cake.

The big question, of course, is whether the cooling is likely to turn frigid this summer. Possible, but it seems unlikely. For one thing, policymakers seem committed to keeping the growth on course, with the folks at the Fed signaling zero interest in raising interest rates. For another, the pressure continues to grow on bankers from President Obama on down to ramp up their still-anemic lending – and the economy managed in the last year to grow even without all the help that looser lending might bring. Sure, Washington’s tap may be dry, but the bankers’ isn’t.

Just as the economy’s slide was anything but orderly, the recovery seems likely to be a stop-and-start sort of thing. One step back for every two forward, as the cliché goes. Lately, we’ve had a step back, for sure. Indeed, the outfit that fixes dates on recession and recovery – the National Bureau of Economic Research – still isn’t confident enough to say that recovery has been under way, despite the year’s worth of positive GDP performances.

But investors who look at the latest gloom on the Street and see darker clouds ahead could be missing the bigger picture. Summertime storms, maybe. And it may yet be a long time before recovery is so strong that it makes a dent in the painfully high unemployment rate. But, if history is any guide at all, the blasts will pass.

(This ran first on the Tabb Forum site).