For all its splendors, travel often brings a misadventure or two. Count the many hours Donna and I spent in a pair of Chinese hospitals overnight last night among those. By turns disturbing and enlightening, the experience was almost Dickensian.

Donna did something bad to her lower back on the treadmill during a regular Sunday morning workout. Her pain settled in by midday and, by midnight, was excruciating. She was in such distress, in fact, that after half a sleepless day in bed, she groaned at about 1 a.m. Monday that she had to go to the ER.

The medical saga then began. First, the staffers at the Sheraton Kowloon were marvelous. Three folks showed up at our room door with a wheelchair, helped Donna into a taxi and gave us a sheet bearing the name and address of the first hospital, St. Teresa’s, a private hospital they recommended.

Off we went. Unfortunately, many Hong Kongers had similar ideas in the middle of the night. Donna was  20th in line to see a single general practitioner on duty. After checking in at 1:27 a.m., Donna was wheeled in to see him sometime after 3 a.m. In between, she was left to writhe on a bed in a ward of about a dozen beds, next to a fellow who, like her, moaned a lot.

The nurses, to be sure, were kind. They provided an icepack, albeit an unrefrigerated one, when I asked. But they couldn’t break the queue, not even for someone in obvious intense pain. It turned out, too, that St. Teresa’s did not have an ER, but only an outpatient clinic along with its 1,000-plus beds, and thus the single GP and long line.

The GP never laid his hands on Donna. Nor did he visit her at her bed. Instead, his exam consisted of asking her questions after they wheeled her into a tiny room to talk with him. He ordered up an X-ray, which, happily but mysteriously, showed nothing unusual. The whole time, he (like most of the others med staff) wore a surgical mask, apparently in fear of the flu outbreak now filling wards in the city. Altogether, this was not reassuring. Visions of MRSA clouded my thoughts.

The GP ordered up an injection for Donna and the nurses complied. After the shot did nothing and I complained, he ordered up a second injection, which also did nothing. Then, he prescribed oral meds, including a muscle relaxant, sending me off to the pharmacy area of the hospital to collect them. These meds did only a bit better than nothing, making Donna at least drowsy, even if still in agony. We feared a kidney stone or some other internal problem, but neither we nor the doc had a clue.

By the way, the first task on entering the hospital and before getting the meds was for me to pay up at a glass-walled counter (like the kind at paycheck-loan places). I paid the equivalent of $174 for the hospital services and a like amount for three drugs. That was astoundingly low by American standards, of course. Still, it was unsettling to be required to pay first, making me wonder what would happen if we didn’t have the money (they took American Express). There have been stories in China of people cast out into the street for lack of funds (though not at public hospitals, as I recall).

At about 4 a.m., it was clear Donna wasn’t improving, even as no one still had any idea what was wrong with her. The staff urged that she visit Queen Elizabeth Hospital, a public hospital that had an ER. An ambulance showed up, after a discomfiting wait, and took us on a leisurely ride through the city to QEH. The driver saw no need to use his lights or siren, and stopped dutifully at every red light, despite Donna’s anguish. 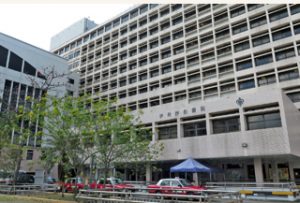 Soon, at QEH, we found the Chinese version of St. Elsewhere. It was jammed with people sitting in a waiting area in dire need of remodeling. The inner treatment area was filled with nearly a dozen folks on gurneys, in various states of distress. Donna joined this queue, with her gurney lined up along the others in the center of the floor, and, again, we waited.  Eventually, she was wheeled into a tiny exam area behind a curtain, and she got a proper exam from a doc who seemed altogether overworked.

Indeed, later I chatted with one of the ER admitting guys, who told me it’s tough for the public hospitals to keep docs. The hospitals routinely see dozens of patients each night and the docs work nonstop through their shifts. They also likely don’t make much money, since the charge for hospital services this time – again, in advance, was about $183. The docs soon burn out and go private, he said. There were no old docs there.

After ordering up a second set of X-rays and processing blood and urine tests, the kindly doc we dealt with found nothing obviously wrong. It was all still a painful mystery. But, by 8 a.m. or so – after a few hours of more writhing – the docs decided that Donna should be admitted for observation and a chance to see a specialist. I signed the papers, even though no one could say when the specialist would stop by. The ER docs also couldn’t give her anything more for pain beyond the meds that seemed to be barely better than Tylenol because the ER didn’t dispense such drugs; only the specialist upstairs had access to them. 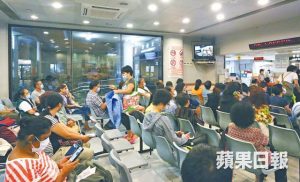 Problem was, the admitting staff couldn’t find room in a ward for Donna. The ward was jammed, so we waited until after 9 a.m. By then, we both had had enough — over eight hours of misery was plenty. Toughing it out at the hotel until we could find a private doc seemed better than laying unattended in an ER, waiting for a room and never being sure when a promised specialist would appear. We signed the papers, acknowledging our discharge against medical advice, were counseled by a doc on what to do should something go awry, and we found our way to a taxi.

Soon, as Donna lay uncomfortably in the hotel bed, I did a little Internet work and turned up a chiropractor’s office near our hotel. We went, found a wonderful group of guys, educated in Canada and in the U.S., who examined Donna properly, determined the problem and began therapy. She apparently had compressed a couple discs in her back on the 15-hour flight to Hong Kong and then worsened the problem by running. The swelling caused the intense pain.

The private practice was well-equipped and comfy, in a sleek downtown  office building above an Esprit shop. Still, the cost was reasonable: the equivalent of $178. Donna will get at least two more such sessions before we leave.

The bottom line: treatment in Hong Kong, unlike the U.S., won’t bankrupt a patient. The docs seem capable, but overworked and, maybe, a bit incurious about their patients’ mystery illnesses. And, at least in the general hospitals, the queuing is heartless at best. That leaves the hard-pressed docs and nurses to take a workaday approach that leaves patients ill-informed, seemingly ignored and feeling beset by griefs beyond their ailments.

It’s not fun to get sick anywhere, but, sadly, there are better places to do so. Happily, Donna is on the mend now. And she’s looking forward to heading home Saturday.